ABODE OF THE GODDESS

The Shakti Peetha of Maa Jayanteshwari, Nartiang, is a well-known name in Meghalaya. Dr Indrani Bora Bhuyan traces the roots of the famous Durga Puja rooted in mythology and known for its fusion of cultural elements. 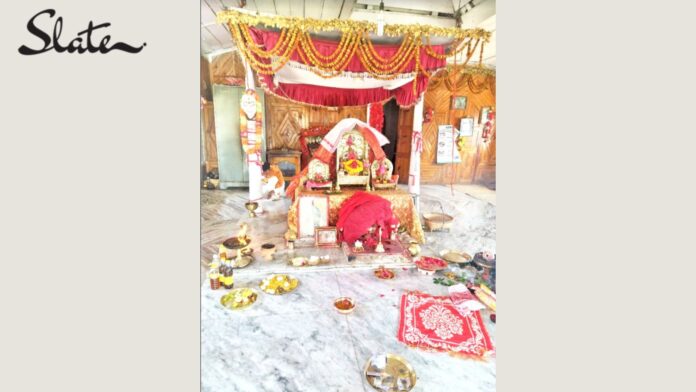 Iung Blai ka Bei Durga is the inscription on the arch of the gate erected at the lane, which leads to the temple. Roughly translated, it means “The divine abode of the Goddess Durga”.

The Nartiang Durga temple, considered one of the 51 Shakti Peethas, is nestled in the lush green hills of the West Jaintia Hills, Meghalaya. It is believed that Ma Sati’s left thigh had fallen in this place during Lord Shiva’s Tandava. Hence, this mandir may be considered to be of almost equal stature as the Kamakhya Mandir.

The noted historian, Sir Edward Gait, in his book, A History of Assam, wrote:

…There is tradition that Jasa Manik went to Koch Bihar and married a daughter of Lakshmi Narayan, the ruler of the western Koch kingdom, who died in 1622. It is said that he brought back with him the image of Jaintesvari, which was thenceforth worshipped with great assiduity at Jaintiapur…” (Chapter XVI, p 315)

The actual location of this Shakti Peetha is clouded due to the lack of evidence; even the Sri Madan Gupter Full Ponjika, an almanac, states that the location of this place lies in the Jayantia pargana of Srihatta town, Bangladesh. In this context, it is important to note that Jaintiapur was the former capital of Jaintia Hills. Some opine that the Nartiang Durga temple is the actual Jayanti Shakti Peeth, though this opinion is up for debate and yet to be established.

The local population of Nartiang believe that the Goddess appeared in the dreams of the king, Dhan Manik, and asked him to build a temple dedicated to her. He took this as a divine order and set about getting the temple built. Soon, he required the services of a priest and requisitioned the services of a pandit from Maharashtra. The Pandit’s family settled in Nartiang; at present, the thirtieth generation of the same family performs the religious rites in the temple. Interestingly, the present pandit is a young man named Anil Deshmukh.

Though the Deshmukh family traces its roots to Maharashtra, they have assimilated with the local Pnar population. But again, the men choose to marry Brahmin women from the Bengali community so that the priestly tradition continues.

The temple built by the king could not withstand the ravages of time – the mandir housing the deity was later restored by the Ramakrishna Mission, Sohra, at the site of the ancient temple. In the year 2017, this temple was declared a protected site.

This place is full of anecdotes. Human sacrifice, for instance, was performed during ancient times and the heads of those sacrificed would roll down the tunnel into the Myntang river, which flows close to the temple. This practice was discontinued during British rule and replaced by sacrificing goats. HK Barpujari wrote in Volume IV of The Comprehensive History of Assam.

… “another outrage occurred; four British subjects were kidnapped and three of them were actually sacrificed” … (Chapter IV. “Resumptions And Annexations” pp107, 108)

This deity is considered the Kuldevi (Goddess of the Clan) of the inhabitants of the Nartiang village. Durga Puja is observed in full fervour for four days and goats are sacrificed by the devotees. The village chief offers the sacrifice and interestingly, a goat is sacrificed on behalf of the king. The sacrificial goat is dressed in a dhoti, made to wear a mask and don earrings. To date, the mask can be seen in the temple.

The population of this village follows Hinduism and the rites followed are a strong blend of Hinduism and the Jaintia ways. Kwai and tympew or betel nuts and betel leaves are compulsory offerings in this temple.

A gun salute is also offered to the Goddess at the end of the festival.

In keeping with the edict of Lord Shiva, a Bhairav is tasked with protecting every Shakti Peetha, and so is the case in Nartiang. The Krangdishwar Bhairav temple is located on an adjacent hillock overlooking the Jayanti mandir. There used to be an ancient walkway connecting the two temples, but only the gateway near the Jayanti temple stands today. This gate is reminiscent of the gate at the bottom of the Mekhela Ujuwa staircase leading up Nilachal hill to the Kamakhya Dham. Guns belonging to the days of yore, and probably used in the freedom struggle against the British, have been preserved here.

Located only 62 km from Shillong, this temple stands as a reminder of the resolve of the population to preserve their religious and cultural identity in the face of oppression by foreign powers and also against the ravages of mother nature.