Anti-border MoU woman to contest from Jirang on RPI ticket

Serimina D Marak was once a Congress leader but resigned after being denied ticket by the party to contest from Jirang. 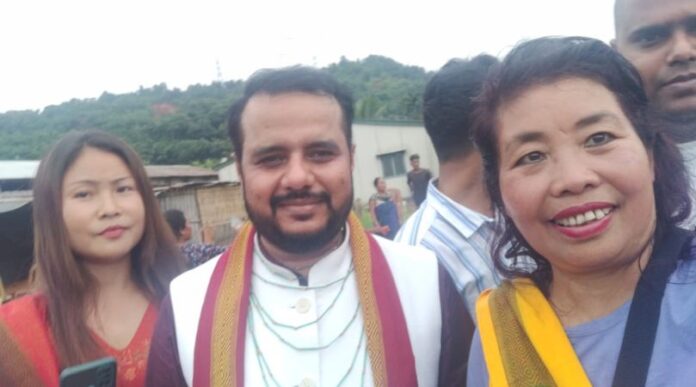 A Garo woman, who has been vocal against the “faulty” memorandum of understanding (MoU) between Assam and Meghalaya governments on boundary dispute, is fighting the upcoming assembly election from Jirang Legislative Assembly Constituency of Meghalaya.

Serimina D Marak was once a Congress leader but resigned after being denied ticket by the party to contest from Jirang.

She is one of the ten candidates named by the Republican Party of India (RPI), which is led by Union minister of state Ramdas Athawale.

Jirang is one of the constituencies, which has been affected by the border deal. There were large-scale protests at Maikhuli after the Maikhuli Fish Pond (Mowamara beel) was transferred from Meghalaya to Assam.

“But this time the NPP base is eroded due to the border deal. For me, this border MoU will be the key issue in the election. The majority of people in this constituency want the border deal to be rolled back. I must give protection to border residents, their lands and properties,” Serimina told The Meghalayan over the phone.

The border deal was signed between Meghalaya Chief Minister Conrad K Sangma and his Assam counterpart Himanta Biswa Sarma on March 30, 2022, under a give-and-take policy to find a solution to six areas of differences out of 12 between the two states.

“This deal was signed without the consent of our people. Who gave them the right to sign such an agreement? The land belongs to the Himas. They did not consult with Himas before signing the agreement,” Serimina said.

“I will work to bring a change to the border areas. There is no proper infrastructure in this border constituency. The previous government has done nothing for the development of road communication. All the roads in Maikhuli and its adjoining areas are deplorable,” Serimina alleged.

Since the formation of Meghalaya, leaders from various national and regional parties represented this constituency. But they have failed to deliver. So the time has come to elect a leader who can at least give time to the constituency and the people, she said.

“There is also misutilisation of the natural resources the constituency has due to the lack of foresightedness of the leaders. The scenario of employment generation is also pitiable. The government has failed to general employment for the local youths,” she also said.

“I have a dozen of agendas for the development of this constituency right from farmers to traders. I am also getting good response from the voters. I hope I will get the opportunity if they vote me to power,” she further said.

“But I am a poor candidate. I do not have the money and muscle power to woo the voters. With a lot of hope I decided to fight the elections and I believe that the people will help me,” Serimina said.

“I had contested in 2008 but lost to the UDP candidate. That was my first experience. I have worked for 9 years in Meghalaya Legislative Assembly Secretariat. I am in politics since my teenage,” she said.

“I used to support Madam Maysalyn War, who was first time elected as MLA from Mawthengkut constituency, but now shifted to Rambrai constituency. I have worked for many years for the Congress party as coordinator of social media Meghalaya Pradesh Mahila Congress. Recently, I was appointed again as joint secretary of the Border Organisation of Pradesh Mahila Congress,” she also said.

“I wanted to contest this election from a national party. But the national parties select candidates based on money and muscle power. They never look for dedicated party members,” she added.

When asked she said he will work for the scrapping of the border deal if voted to power.