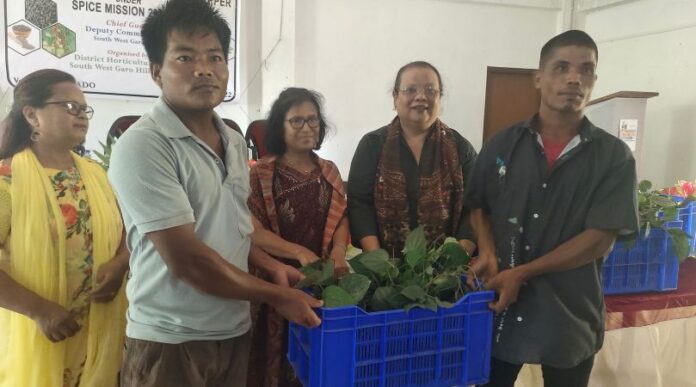 A programme on black pepper under Spice Mission 2022-2023 was launched by Additional Deputy Commissioner of South West Garo Hills, AVD Shira at Multi Facility Centre, Ampati on Tuesday. It was organised by the office of the district horticulture officer, Ampati.

While addressing the gathering as chief guest, A V D Shira encouraged the beneficiaries to make use of the privileges provided by the government as long term solution to address the economic issues. She persuaded the crowd to plant the saplings and consider it an investment for the future of their offspring’s by leaving them a fruitful legacy which will make them financially independent.

Introducing the objectives of the mission and also encouraging the farmers to cultivate black pepper extensively on mission mode, Joint Director of Agriculture of West Garo Hills, SS Kharsati, in her keynote address, informed the beneficiaries that the climate of Garo Hills is suitable for cultivation of black pepper and this mission will increase employment opportunities for farmers as black pepper fetches high price in the market, which will improve economic conditions of not only their families but also the district and the state as a whole.

Appealing to the beneficiaries to not discard it as any garden plant because it is being distributed for free, Kharsati also told the farmers to seek help regarding scientific methods of cultivation, from horticulture and agriculture offices of the district.

Expressing his gratitude towards farmers for accepting to plant black pepper, District Agriculture Officer of Ampati, JS Momin, urged the farmers to work hard to contribute towards the economic growth of the state and region. He also invited the farmers to walk into his office if they require any help.