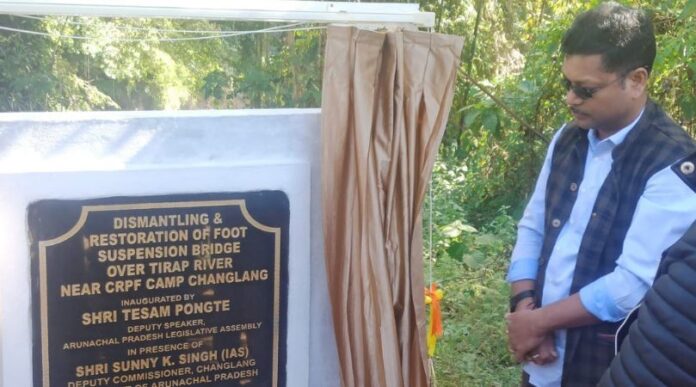 The bridge, which was funded under the MLA LADs Fund of 2022-2023, was first dismantled completely and then newly constructed at an estimated amount of Rs 20 lakh. The department of Rural Works Department (RWD) government of Arunachal Pradesh executed the construction.

While speaking to reporters, Pongte said the bridge will benefit both areas of Changlang, that is, old Changlang and new Changlang. He informed that the bridge is a very old bridge that was constructed in the early 1986-87. He said that there has been no renovation since then and it is only now under his leadership that the old bridge was dismantled and replaced by a new one.

Other villages like Dunglung, Kantang and other nearby areas will also benefit from the bridge as it will cut short around six to seven kilometers of travelling. For college students also it has helped them to shorten their walking distance.

Pongte, who is also a representative of 53-Changlang North constituency, said a DPR report for construction of Pradhan Mantri Gram Sadak Yojana (PMGSY) road towards Changlang town and an amount of Rs 48 crore has been proposed to the state government to sanction for the construction of this road. Regarding the recarpeting of a 22 kilometers road in and around Changlang town, Pongte informed that the work has already started.

Regarding school infrastructure in Changlang district, the Deputy Speaker said he will check, adding that he is stressing more on quality education. He also urged the villagers to send their children to government schools.

“Our villagers are very apprehensive to send their children to the government schools because they don’t trust them. I used to visit the school and interact with the students. We have to provide the best education to win the trust of the public so that they will send their children to school. My target for the next survey is that our district should come in the top ten list in terms of providing quality education,” Pongte informed.