Khandu also assured that there is no dearth of funds with the government, however, he demanded quality work. 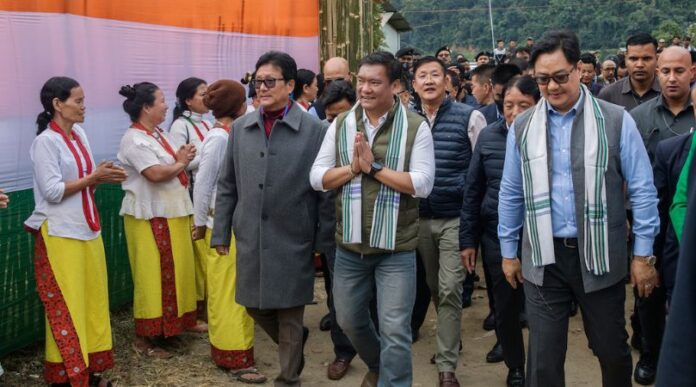 Khandu while responding to a memorandum requesting several infrastructural development projects in the Dumporijo constituency in Upper Subansiri district, said all will be taken up and funds will be sanctioned. He directed the district administration to first clear all land-related matters where these projects are being proposed.

Khandu also assured that there is no dearth of funds with the government, however, he demanded quality work.

“With the support of the Central government and our efforts, we have enough funds,” he said.

Khandu also asserted geo-tagging of all developmental projects to check misuse of funds and ensure quality and timely completion.

Drawing the attention of the people towards the vast potential of the district in horticulture and agriculture produces, the chief minister encouraged people to go for entrepreneurship and assured government support. To begin with, he said that the state government will offer aid for the establishment of a mini-food park in the district to give a fillip to entrepreneurship.

Continuing his whirlwind official tour to the districts, Khandu reached Dumporijo in Upper Subansiri district and laid the foundation for a new office of the additional deputy commissioner at Digbak. The new ADC office complex will overlook the picturesque Dumporijo and Daporijo townships along the banks of the mighty Subansiri River.

A day earlier on Saturday, Khandu inaugurated a double-story boys hostel at VKV, Kuporijo, in presence of Rijiju and legislators of Upper Subansiri district.

Incidentally, VKV Kuporijo was established in 1987 but only this year the school got its land possession certificate, which was formally handed over to the school authorities by Khandu.