The CM added that money may not be that big to make a difference but at least it is an incentive for the players to let them know that the government is supporting them. 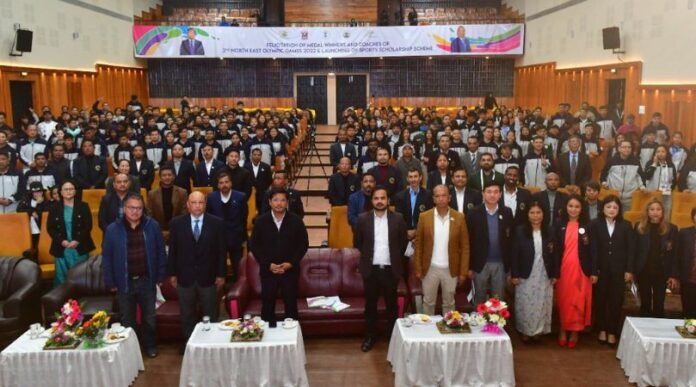 Chief Minister Conrad Sangma launched the Sports Scholarship Scheme and felicitated the medal winners and coaches of the 2nd North East Olympic Games 2022 on December 2 at U Soso Tham auditorium in which the state government will give Olympic Games medal winners from the month of January.

“We are going to start the scholarship because I have wanted to do it for a very long time. And today, we’re going to introduce a scholarship programme, which means that starting in January, every person who won a medal at these games will receive financial support from the government of Meghalaya,” the CM said at the programme.

The CM added that money may not be that big to make a difference but at least it is an incentive for the players to let them know that the government is supporting them wherein the money will be deposited in their account every month.

“We want a lot of infrastructure to be created. Both the JN Stadium Indoor Complex and the PA Sangma Indoor Stadium at Tura and when these two indoor complexes come up, I can assure you that these will be one of the best indoor complexes in the North east and maybe the country as a whole,” Sangma said.

The Chief Minister also assured the associations of support from the government.

“And I hope that in the next North East Olympics, Meghalaya should be number one in the tally,” he said.

According to commissioner and secretary of Sports and Youth Affairs Vijay Kumar, athletes receive financial assistance through the scholarship programme, which serves to motivate them and their families.

Turning to the Meghalaya Games debacle, where he said that it was a struggle in the beginning even as the Meghalaya games were hosted after 16 years.

Stating that the state government, Meghalaya State Olympic Association faced a lot of criticism, he said, “People started making fun of us and started to say that they could not even organise Meghalaya games, how will they organise North East Olympics. That was a challenge we took up and we said no.”

The Meghalaya Games was held in the month of May this year which was marred with controversy after sordid pictures of the sleeping area, toilets and bathrooms in athletes’ accommodation at Jawaharlal Nehru Sports Complex went viral on the Internet painting a very sorry picture of the arrangements.