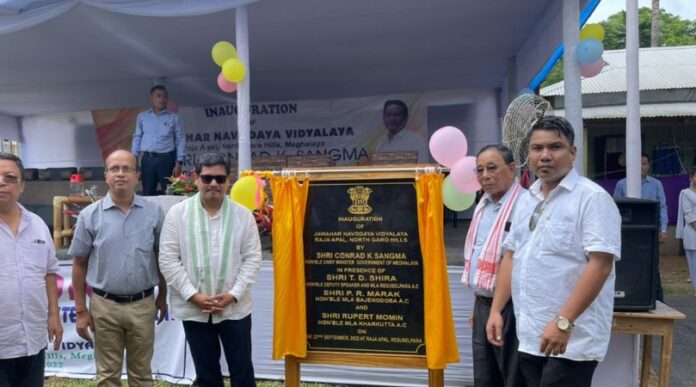 North Garo Hills, one of the youngest districts of Garo Hills, will become the permanent site for the region’s fourth Jawahar Navodaya Vidyalaya (JNV) central school.

The chief minister, who is on a two-day tour of the North Garo Hills district, announced the inauguration of the temporary site from where the school will function until the completion of the permanent campus, along with an additional sanction of Rs 10 crore for the creation of an all-weather road that will connect the village to the JNV permanent campus.

Addressing public leaders and citizens of the area, including village nokmas, senior citizens, parents and students, the chief minister highlighted the efforts being made to uplift education in the state, adding “Education and literacy of our children have to be given a priority if our state has to progress. This is why we have put forward several programmes and policies and the Education Policy has been launched to give direction and create a roadmap.”

“Our government is spending Rs 1500 crore on government-aided schools in the state and in the last four-and-a-half years we have embarked on a comprehensive plan to improve education that includes repairs, new buildings and classroom extensions,” Sangma added.

The Deputy Speaker of Meghalaya Assembly and local MLA of Resubelpara, Timothy D Shira, was singled out for praise by the chief minister for playing a vital role in getting the new JNV for the region.

West Garo Hills is the only district without a JNV, but this is supplemented with the establishment of the Kendriya Vidyalaya Sangathan or Central School located in Dakopgre Tura.