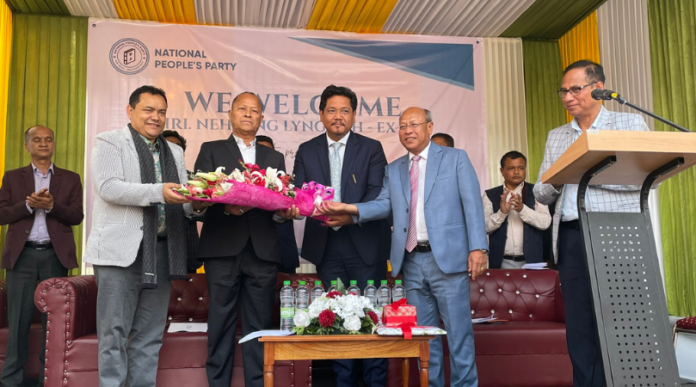 Former minister Nehlang Lyngdoh on Wednesday joined the ruling National People’s Party (NPP) and is seeking to contest from Khliehriat constituency in the upcoming 2023 Assembly elections.

The former two-time legislator was welcomed by the NPP national president and Chief Minister Conrad K Sangma during a function held in the presence of Deputy Chief Minister Prestone Tynsong, Cabinet Minister Sniawbhalang Dhar and other party leaders.

The ex-minister, who was accompanied by a large number of his supporters during the joining ceremony, said his constituency is still backward compelling him to contest again in 2023. He also appealed for support from the people of constituency as well as the NGOs.

Stating that the NPP is growing from strength to strength, Lyngdoh said, “The NPP wave is strong. The NPP in Meghalaya is like the BJP at the national level (strong). That is why I joined the party to be part of the government so that I can bring more development to the constituency.”

When asked the reason behind his decision not to contest in 2018, the former legislator said, “I have worked in 2003 and 2008 and I decided not to contest to pave way for other people especially educated to take the responsibility of serving the constituency but unfortunately, I see that the constituency continues to be lacking in all fronts.”