Deb, who contested from the BJP, won with 43 votes while his rival candidate CPI-M nominee Bhanu Lal Saha bagged 15 votes. 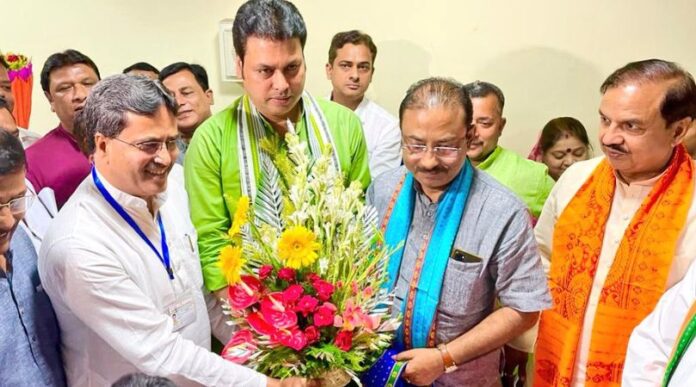 “Gratitude to the BJP and IPFT MLAs of Tripura for electing me as a Rajya Sabha MP. Gratitude to PM Sri @narendramodi Ji, @BJP4India President Sri @JPNadda Ji & HM Sri @AmitShah for giving me this opportunity to represent Tripura in Rajya Sabha. With the blessings of Mata Tripurasundari, I will continue to serve beloved people of Tripura till my last breath,” Deb tweeted after winning the election.

Among 60 members of MLAs, only two MLAs didn’t cast their votes including Brishaketu Debbarma of Indigenous Peoples Front of Tripura (IPFT), who was disqualified from the Assembly, and sole Congress MLA Sudip Roy Barman boycotted the vote.

The voting process begun at the premises of the Tripura Legislative Assembly at 9 am and continued till 4 PM. The counting started on the same day from 5 pm.