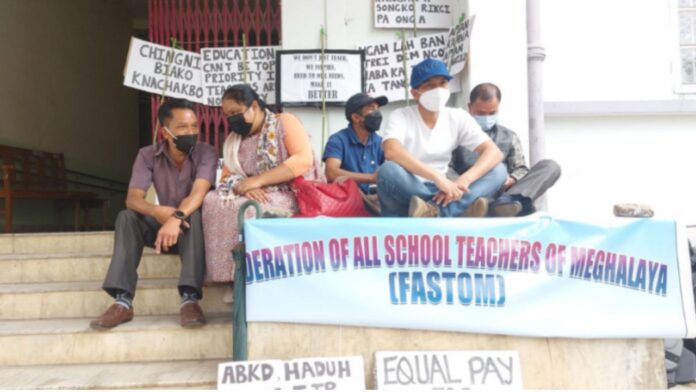 However, the chief minister speaking to the media after the cabinet meeting on June 9, defended the government’s lack of governance by stating that the issue with the ad hoc teachers will require hundreds of crores of rupees to resolve.

The chief minister also mentioned that the reason the government had to put it up before the cabinet is that it has to cut the budget of some other departments, and the ministers and departments concerned will have to be aware of it and know that maybe there is going to be a budget cut, maybe in road connectivity, budget cut in maybe medicine or health . . . and maybe some other aspect. So, these kinds of detailed discussions on where the money will come in from need to take place.

Criticising the chief minister’s contention, Lyngdoh said, “To be blunt, the problems are not with the Adhoc Teachers Sir, it lies with how efficient people working in the government are. The above statement made clearly shows how aloof you are from reality.”

The letter from the FASTOM further stated that the cabinet’s ‘detailed discussion’ on budget cuts; to cut the budget from other departments and the likes when Rs 5240.32 crore was returned to the central government because the state government was not able to provide the utilisation certificate is a problem of the government.

“To discuss inflation when everyone is aware will only rob us of the time we both do not have. A statement on the diversion of funds is not justified, the fund that was returned was for developmental projects. Why should ad hoc teachers be sacrificial lambs for the misstep of the Government?” Lyngdoh said in the letter.

The ad hoc teachers now wait for the third and the last cabinet meeting with the hope to not be let down yet again by the state government.

“Mr. Chief Minister and Cabinet Ministers, we still hope and pray for better days. But, we are tired. Our patience is running out. At the commencement of the third cabinet meeting, we’ll either rejoice with gladness or we’ll have to prepare to indefinitely sleep on the streets as we had stated on May 12, 2022,” the letter said.