Aaranyak, an NGO devoted towards working for human wellbeing through biodiversity conservation, invited Smita to train upcoming talents of the state in the field of environmental photojournalism. 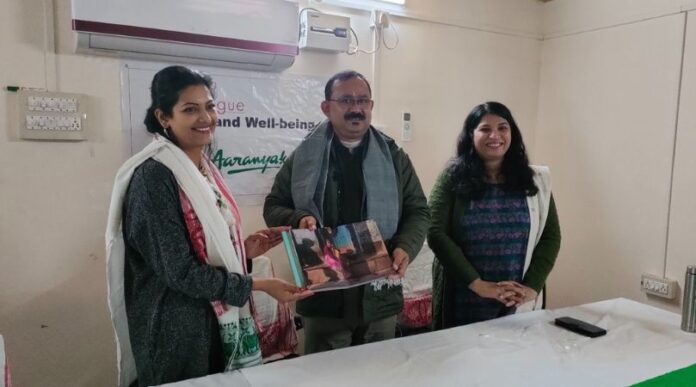 Eminent photojournalist Smita Sharma on January 25 conducted a capacity-building workshop on “Storytelling through photography” for an audience of young and emerging talents in the field in Guwahati.

Aaranyak, a premier NGO devoted towards working for human wellbeing through biodiversity conservation, invited Smita to train upcoming talents of the state in the field of environmental photojournalism.

Over 30 people registered through an open invitation extended by Aaranyak via its social media handles, and attended the session which took place in the conference room of its administrative office.

Smita is a Delhi-based award-winning photojournalist who has documented social justice, sexual crimes, human trafficking and environmental issues in the Global South through long-form visual narratives.

Aaranyak’s secretary-general Dr Bibhab Kumar Talukdar addressed the participants at the beginning of the workshop and encouraged them to learn as much as possible from Sharma, who has vast experience in the field of photojournalism.

Smita provided tremendous examples of how to crop burning activities in nearby agricultural areas in Delhi cause pollution in the capital city.

“In my photojournalism career, I’ve worked with a couple of farmers in the NCR region who have abandoned burning crops due to pollution-related issues and adopted alternatives,” she stated.

As part of her journey to Assam, Smita visited Dadara and Pachariya of Kamrup, home to the endangered Greater Adjutant Stork, also known as the Hargila bird. Aaranyak’s senior conservationist, Dr Purnima Devi Barman, accompanied her on her visit. Dr Barman works to have the communities involved in conserving the greater adjutant stork colonies in Kamrup district of Assam.

“I have experienced the culture of the Hargila Army and been to some schools in Kamrup with Purnima, where I am amazed by their conservation sensitivity,” she said.

By sharing her struggles, motivations, and successes, Smita inspired budding attendees to be creative and keep pushing themselves forward to make a change in the world for a better place to exist.

Smita has also received the Indian of the Year Award 2017, Exceptional Women of Excellence Award 2018, Las Fotos Advocacy 2021 Award and One World Media UK Award for her short film ‘Rebels with a Cause’. Her works have been published in various places like National Geographic Magazine, The New York Times, BBC World, WSJ and TIME amongst many others.

Smita is actively engaged in public speaking, victim advocacy and international public education and her work has been exhibited and shown globally, including at the UN Headquarters in New York. Smita recently published her first photo book ‘We Cry In Silence’ documenting the cross-border trafficking of underage girls in South Asia published by FotoEvidence.