Earlier, the union stated that they have written to the VC time and again for a meeting to apprise him of different issues but there was no response. 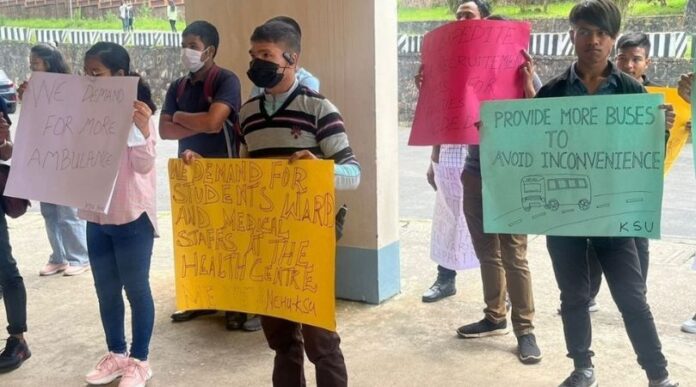 The Khasi Students’ Union (KSU) North Eastern Hill University unit staged a protest in front of the office of the vice-chancellor on September 22 calling for the appointment of a local Pro-VC and an upgrade the infrastructure of different departments.

The students also closed down the office of the VC.

Later, the VC, Prof Prabha Shankar Shukla, met the agitating students and after getting his assurance, the students unlocked his office.

Earlier, the union stated that they have written to the VC time and again for a meeting to apprise him of different issues but there was no response.

A brief spat ensued between the VC and the students.

Shukla shouted, “This is not the way, first you open up and I am ready to discuss with the students. Without any information you get here, you cannot take the law in your hand.”

The livid VC said that the students could have informed him and discussed it with him.

Some of their demands include maintenance of hostels, filling up of vacant posts, as well as other issues such as buses, examinations, etc.

The students held placards that read, ‘To appoint a local qualified Pro-VC’, ‘upgrade and maintain the infrastructure of all departments’.