A petroleum pump staff informed that they faced shortage after the announcement made by Assam Petroleum Mazdoor Union. 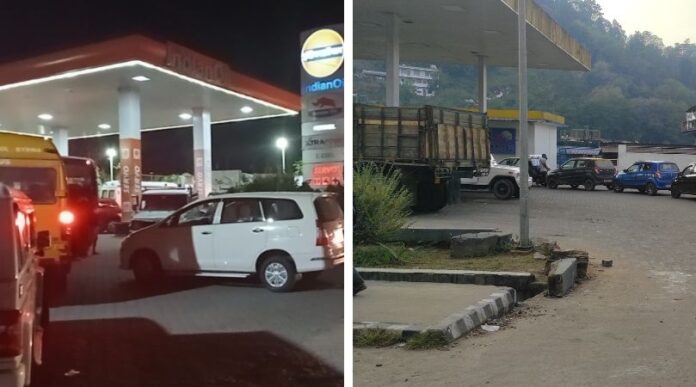 After the Assam Petroleum Mazdoor Union’s decision to stop transportation of petrol and diesel to Meghalaya, some fuel stations in Nongstoin were seen running out of stock as people rushed to nearest petrol pumps to get fuel.

Long queues were also witnessed all over Ri Bhoi district.

People were seen rushing to pumps forming long queues which stretch to the road leading to traffic congestion at New Nongstoin village.

An Indian Oil fuel station at Upper New-Nongstoin was closed as it was running out of stock.

A petroleum pump staff informed that they faced shortage after the announcement made by Assam Petroleum Mazdoor Union.

It was also informed that a section of the Gas Agency and distributors including Ailang Gas Agency has reported a shortage of supply of LPG Cylinders causing inconvenience to customers. The gas agency employee has informed that they were running out of stock since the incident as suppliers from Assam were refusing to enter Meghalaya.

Fear of fuel shortage stalks consumers across Garo Hills after the announcement by Assam Petroleum Mazdoor Union body as people have been rushing to petrol stations to stock up on gasoline in the eventuality of a crisis.

West Garo Hills Deputy Commissioner Swapnil Tembe has cleared the air on the situation stating that administration is ensuring there is adequate supply.

“We urge the residents not to resort to panic buying of excess stock of petrol and diesel. All necessary security arrangements for smooth movement of fuel tankers have been assured by the state government and shall be ensured by the district administration and police,” assured DC Tembe.

The worrying factor for authorities is the possible shortage of fuel if citizens continue to rush to fuel depots to fill up their tanks creating a shortage that could have been avoided.

Garo Hills has been relatively peaceful in the aftermath of the Jaintia Hills firing incident.