Not so curious case of missing dustbins and seats in city

For proper waste management, he has suggested having paid collection centers which can be run by NGOs or the state government 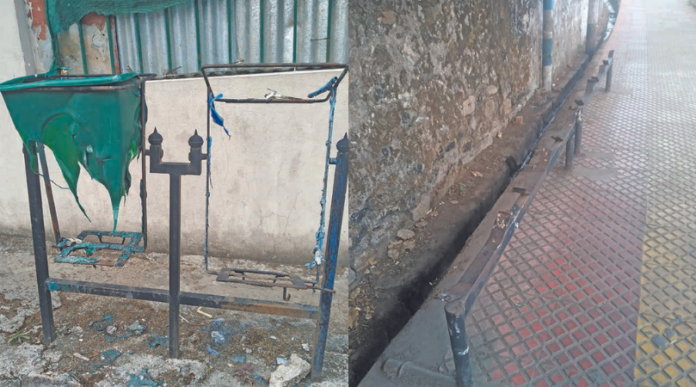 With several places in Shillong adorned with colourful murals, flower beds and shrubs as part of the beautification drive, yet the absence of civic sense brings out the ugly side in the form of street litter, burnt dustbins, uprooted seats from bus-sheds that have become an eye-sore still exists.

The green and blue dustbins which were installed in different places are presently nowhere to be seen and even if they are found, they are in a sorry state – burn down by miscreants.

The Shillong Municipal Board is in no mood to re-install these bins stating that civic sense is yet to be inculcated among the people.

An official said, “At the moment, we have not taken a call to re-install them. We have installed it thinking that people will use it. The dustbins are for street litter and not meant for household litter. But no matter how many awareness programmes we conduct, the problem of street litter still continues. As for the burning down of some dustbins in and around the city, it is the work of miscreants.”

The official went on to say that the dustbins have been misused which prompted the SMB to remove the dustbins from certain stops.

There are also instances where the dorbar shnong had requested the SMB to remove them as people were throwing household litter.

Besides the issue of dustbins, seats in several bus-sheds in the city have been completely uprooted. “As for the seats that are uprooted from the bus-sheds from several parts of the city, the private party that has installed the seats and erected the bus-shed should take care of these matters. But then again, it all boils down to our attitude,” the official said.

Eco-activist and RJ of Radio Mirchi 91.1, Nicholas J. Kharnami said that there is no sense of ownership for it and that the problem of waste management is the core issue. “There is no sense of ownership for this. Putting up a bin is not an issue but waste management is the issue,” he said, adding that there are drug peddlers also who take these bins.