The NSCN-IM reiterated that the Naga national flag is non-negotiable in the name of Naga political solution. 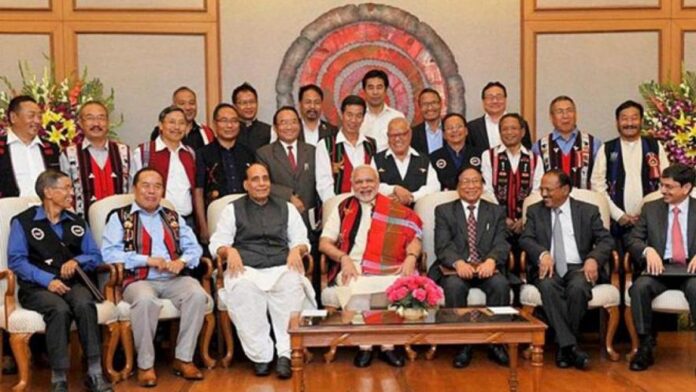 As the stalled Indo-Naga political talk resumes in New Delhi on September 20, the National Socialist Council of Nagaland (NSCN-IM) has appealed to Prime Minister Narendra Modi to take the Naga issue to its logical conclusion.

The NSCN-IM reiterated that the Naga national flag is non-negotiable in the name of Naga political solution.

The talks between the Centre and the Naga outfit resumed based on the Framework Agreement signed on August 3, 2015.

The move comes three days after NSCN (IM) agreed to resume peace talks with the Centre following a meeting between 11 representatives of the extremist group and the 22-member Core Committee on Naga political issues comprising MPs and MLAs of Nagaland last week.

The negotiations between the Centre and the NSCN (IM) have been stalled since May over the issue of a separate flag and a constitution.

“The stand of the NSCN on Framework Agreement (FA) has been distinctly stated time and again. The decision of the National Assembly on 31st May 2022 and the solemn declaration (resolution) adopted on 26th August, 2022 by the Naga National Workers of NSCN from Nagaland State reaffirming “one people one nation” and to stand by the Framework Agreement… The unifying principle of One People One Nation symbolized by the God given Naga Nation Flag is non-negotiable in the name of Naga political solution,” the outfit said.

The NSCN-IM said that 25 years of Indo-Naga political talks and seven years of Framework Agreement is a long period of endurance and commitment exhibited by Naga people for peaceful settlement of Naga issue.

The central government signed a framework agreement with the NSCN (IM) on August 3, 2015, and also entered into an agreed position with Naga National Political Groups (NNPGs) in December 2017.