It must be recalled that 14 civilians were killed in a botched army operation by the 21 Para Special Forces at Oting on December 4, 2021. 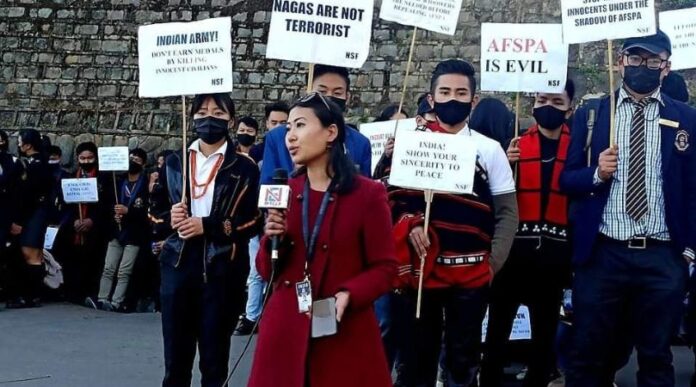 The Global Naga Forum (GNF), a civil society comprising Nagas from across the world, on December 5, demanded the prosecution of guilty army personnel involved in Oting and Mon massacres under civil law so that justice can be given to families of the victims.

“One year ago on December 4, 2021, Indian army commandos killed 14 innocent civilians and wounded several in Mon district. The personal tragedies of the families continue without recourse because the Union government has done nothing to prosecute the guilty, despite the state government-appointed Special Investigation Team (SIT) naming 30 army personnel involved in the killings,” the GNF Media Cell said in an official statement.

It must be recalled that 14 civilians were killed in a botched army operation by the 21 Para Special Forces at Oting on December 4, 2021.

The GNF said that it continues to mourn the dead along with their families and stands for justice in solidarity with them and with the Naga people.

The GNF said the violations go back to the mid-1950s military invasion by India to put down the Naga people’s movement for self-governance and to the Armed Forces Special Powers Act (AFSPA). And the violations have not stopped since. “The Oting and Mon killings were not aberrations from, but a predictable consequence of, Indian policy and military law under AFSPA,” the form added.

“The reason all these military crimes against Nagas keep happening repeatedly and predictably is AFSPA, which has been in force for 64 years running, even during ceasefire periods and now, while the Union government is supposedly in the final stages of negotiations with the Nagas for a peaceful resolution of the 75-year-old Indo-Naga political problem,” the statement further said.

The GNF also demanded the repeal of AFSPA, the 64-year-old Indian military law designed to kill Nagas with impunity.

“The GNF is grateful to foreign governments and international communities for raising questions about the legitimacy of AFSPA in the United Nations Human Rights Council (UNHCR), during the 4th Cycle of the Universal Periodic Review (UPR), held in Geneva in November 2022,” it statement read.

The statement also pointed that representative of fourteen foreign governments objected to AFSPA for violating people’s rights in one way or another, a few recommending its repeal.

The countries include the USA, Germany, Norway, Belgium, Estonia, Canada, Croatia, Czech R, Costa Rica, Brazil, Lithuania, Italy, Pakistan, and Greece. We hope the Indian government will act responsibly by repealing AFSPA, so India can comply with obligations under the International Covenant on Civil and Political Rights, the GNF said.