It may be noted that the foundation stone for the residential higher secondary school in Lemmi, Pakke Kessang was laid by Chief Minister Pema Khandu on March 20, 2021. 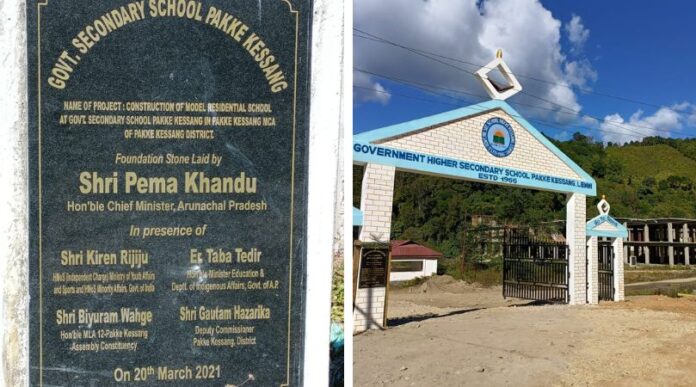 Pakke-Kessang in Arunachal Pradesh got its own district four years back, and ever since, it has been developing at a fast pace with the state government undertaking many developmental projects with focus being on education, health and road projects.

A team of reporters visited the ongoing construction of the biggest school located in the district headquarter Lemmi, where they witnessed the work at the Government Higher Secondary School Pakke Kessang going on at full swing.

“Different laboratories especially for Science and Mathematics will be included in this building. There will be a separate computer class for secondary sections besides a smart classroom for every class that has been included in this project,” Loder informed.

Deputy Director of School Education (DDSE) of Pakke Kessang district, Hiba Tama, also highlighted the whole scenario of the district and the construction of the school in particular.

“Today Pakke-Kessang district has a total number of 52 schools. This district was very backward but after the arrival of highway and road development, the other developmental activities also followed. This school was a model secondary school and it was upgraded into a model higher secondary school in June this year. In this school, for the next academic year, we need post graduate teachers,” Tama said.

Speaking to MLA of Pakke Kessang, who is also the state president of the Bharatiya Janata Party (BJP), Biyuram Waghe, he said, “Now we have two Higher Secondary Schools in Pakke Kessang district. Before we had only one which was in Seijosa but now we have created this one after meeting with the local leaders here, the education secretary and education minister.”

“For this school, we planned in 2020 and the total amount that we have sanctioned for the total construction is Rs 36 crores. Around 71 per cent of the construction has been completed already. So many facilities have been included and the building is very huge. The people here, including the students, and the education secretary, have appreciated it.

“Not only the schools, we are also focussing on health sectors as well. If the locals are asking and initiating for making school and health facilities, then it is our duty to provide them, to support them. We have inaugurated many model schools like these in other areas as well. This model higher secondary school will be fully functional by March 2023. I thank the state government for providing and supporting us in this field,” Waghe added.

It may be noted that the foundation stone for the residential higher secondary school in Lemmi, Pakke Kessang was laid by Chief Minister Pema Khandu on March 20, 2021.