Power of the SPOKEN WORD

Who doesn’t remember listening to stories, be it around fireplaces or safely tucked inside warm blankets, away from the prying eyes of the night? Eleanor A. Sangma revisits the importance of a storytelling culture, rooted in values that, like the tales of yore, pass down from one generation to another. 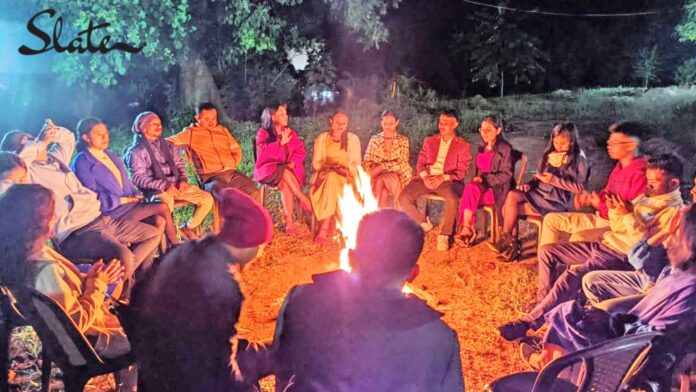 By Eleanor A. Sangma

In Native Hawaiian, the word mo’olelo refers to stories, myths and legends: a combination of two words – mo’o, meaning succession, and olelo, which means words or language. Translated literally, the word means ‘succession of language’, apt for the tradition of oral storytelling.

An essential part of many cultures, stories travel far and wide; in the process, survive over many generations through skilled narrators.

Dan Marak’s love for stories began with his adoptive grandfather who loved telling them old tales from around the world. They would refer to him as Atchu Golpo, which literally means ‘grandpa story’.

He said, “Grandpa went to a Bengali school, so he would tell us Bengali stories along with Aesop’s fables. He would also translate the works of Hans Christian Anderson for us in Garo.”

Each time Atchu Golpo would come to Tura from the village, all the kids at home would sit and patiently wait for him to finish his meal. “While he had his bidi, we would keep the betel nut prepared so he wouldn’t waste time doing it himself. That’s how eager we were to hear his stories,” he recalled.

Other than him, Marak and his siblings would often ask their parents to tell them bedtime stories. “I have a lot of siblings. So, someone would sit on the foot of the bed, some on stools and others would cuddle up to our parents while listening.”

He shared how there was also a storytelling culture in his locality when he was younger, especially during funerals and weddings. On funeral nights, the older men would tell them horror stories. The younger ones would cut up betel nuts for them, or prepare tea while listening. On nights before a wedding, when everyone gathered to prepare the meat or decorate the stage, people would tell love stories instead of scary ones. “Whoever was good at telling stories, kids would flock to his side.”

He said these stories have led him to fall in love with literature. As he grew up and learned to read on his own, he started reading books and novels. “They also motivate me to write even though I’m not very good at it,” he laughed.

Over time, this culture is fading away. He expressed his regrets at how children in recent years have not been able to enjoy the full experience of storytelling, to hear folk tales and stories passed down through generations. “During gatherings, we hardly talk with each other anymore. Children are occupied with their phones while the older generation is busy with their own vices.”

He added that skilled and witty storytellers are hard to come by these days. “Many of these stories have not been written down and may disappear soon.”

Cheringra Ch Marak, an artist, shared how her father told stories when she was young. Now, she is a mother of a one-year-old daughter herself. “Back then, these were mere bedtime stories to me. Looking back, now I have realised that they contain so many life lessons for us.”

She remembers enjoying these tales as a kid, hearing about different creatures of myths and legends. It is only after growing up that she understood the intricacies of such stories and unearthed the values hidden in them. “I learned valuable lessons – a person who wishes for other’s misfortune will only end up in trouble himself.”

She has not been able to pass on these stories to her daughter as she is too young still, but is determined to pass down the legacy once she is older.

She also expressed her desire to keep a written record for herself. “I want to preserve the tales of our ancestors. I’ve heard many of them, but we all know our memories tend to fail us eventually. So, I want to work on this while my father is still here,” she said, adding how she feels that such stories told by parents or grandparents “stay with us throughout our lives, rather than the ones taught to us in a rigid academic setting.”

The artist further highlighted how these storytelling sessions made her bond with her father stronger in the long run.

Chingkame Momin, a lecturer from Tura, agreed with the notion that storytelling is a way for parents and children to spend quality time with each other.

After her father’s death when she was young, her mother had to find employment. This would often take her to Shillong for days on end –

an absence that was filled by Momin’s oldest sister. Every night, after all the chores had been completed and meals served, they would gather on her sister’s bed who would then proceed to tell them stories. “She’s such a good narrator. She’d get into the character and make it interesting for us,” she reminisced.

Momin feels that the current generation is more engaged in the virtual world, rather than actual reality. Parents also do not have enough time to spend with their children. Moments where they can form a strong bond, even through the simple tradition of storytelling, are fewer.

According to Momin, an increasing number of children are becoming unaware of old Garo stories, and that is how our culture might also gradually fade away.

The tradition of oral storytelling is as old as language. It can be confined to one’s childhood bedroom, or around the campfire on a cold winter night. It takes us back to our roots and offers an opportunity for people to connect not just to the past, but also to one another.

Whether the legacy continues depends on us, the listeners; the other vital element of a storytelling session is active listening. How this unfolds remains to be seen.