Tension was palpable since morning when the public came to know about the sit-in by the pressure groups. 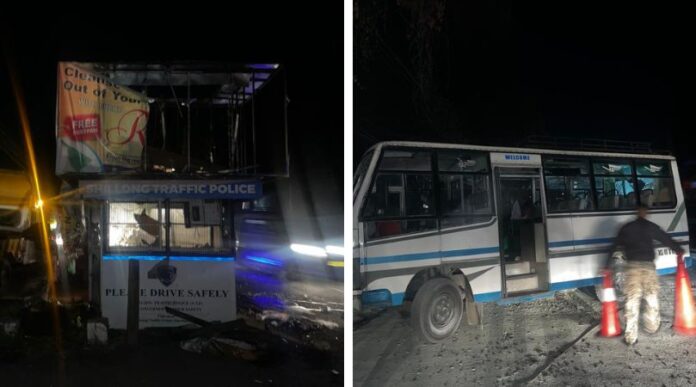 The sit-in-cum-candlelight vigil held at Civil Hospital Point to protest against the killing of five residents of Mukroh village in West Jaintia Hills by Assam Police personnel on November 22 turned violent with unidentified miscreants torching a traffic police booth near the protest site.

Miscreants also tried to burn a bus near the Civil Hospital and a welcome arch (for the now cancelled Cherry Blossom Festival) put up near the venue even as some snatched a shield from the police personnel present at the site and burnt it. Later some miscreants also pelted stones at police personnel at Civil Point and Barik Point.

There were also reports of a petrol bomb being lobbed into the compound of the Survey of India at Malki Point.

“We fired a few shells of tear gas to deter the protesters from causing any harm to civilians since vehicles were still plying as the traffic was being diverted towards Pine Mount side,” SP (City) Vivek Syiem said.

He informed that the fire did not damage the mini bus which was on requisition by the police deployed for law and order duty. However, the front windshield of the bus was totally damaged.

He said three persons were injured after they were attacked at IGP and civil hospital junction.

Meanwhile, the police have registered an FIR on the incident.

As soon as news of the violence spread, shops and business establishments throughout the city downed their shutters even as panicked stricken citizens rushed to the safety of their homes causing huge traffic jams all over.

It may be mentioned that the sit-in was organised by the Khasi Students’ Union, Federation of Khasi Jaintia and Garo People, Hynniewtrep National Youth Front, Ri Bhoi Youth Federation and Jaintia Students’ Union.

Tension was palpable since morning when the public came to know about the sit-in by the pressure groups. Shops and street vendors closed the businesses as soon as the members gathered at Civil Point to start their programme.

Later in the evening after the meeting at around 6 pm a group of youths at Garikhana asked the remaining shops who had not downed their shutters to close down.

Earlier, HYNF president Sadon Blah while speaking at the sit-in-cum-candlelight vigil said that the inability of the governments to settle the 50-year-old border dispute with Assam has on many occasions led to bloodshed.

“Do not try to settle the border dispute with the blood of the poor who live in the border villages. Settle it with peace, consensus and by doing good and not by force,” Blah said.

He said that the Assam government has agreed to a probe by the Central Bureau of investigation and has also set up a judicial inquiry into the killing but will that state make the report public to the people of Meghalaya to justify that force was used by them.

The HNYF president also said that only filing an FIR against the Assam police personnel is not enough but the Meghalaya government should arrest them immediately.

FKJGP president Dundee Khongsit said that due to discrepancies and corruption during recruitment of police personnel and therefore it has come to haunt its own since those appointed do not have the will to serve the people.

Khongsit said that the people of the state do not have any reasons to be proud of their police personnel.

KSU general secretary Donald V Thabah urged the Khasis to not attend office on Friday as they will observe Non-Cooperation Day.

The KSU general secretary also asked how the Meghalaya police could protect its own people when the Director General of Police (DGP) is from Assam.

“The question here is why the government did not appoint a DGP who is from the state?” he said.

Thabah also asked the government to set up police outposts in the border areas for the protection of the villagers.

The KSU general secretary also said that they will intensify their agitation in the days to come if the government does not show in action that it is doing something to protect the lives of the people of the state living in the border areas.