Members of four pressure groups said they will never allow the state to make Ri Bhoi district a gambling place as it will affect the general public and the youth. 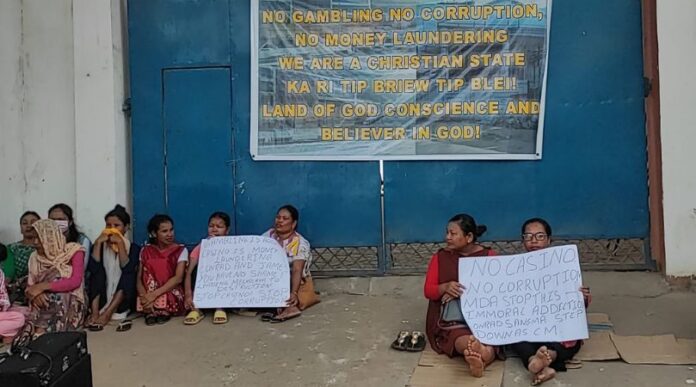 The opposition All India Trinamool Congress (AITC) legislator from Umroi George B Lyngdoh took part during a protest staged by various organisations on September 22 in front of the gate of the proposed casino building at Khanapara in Ri Bhoi.

Members of four pressure groups – HANM, MPUF, RBYO and MPSO — also tried to break the property’s gate but were stopped by the police.

The groups, which made their way to the proposed site where construction is still going on, said they will never allow the state to make Ri Bhoi district a gambling place as it will affect the general public and the youth. The groups also accused the government of lying to the public as well as protestors for giving temporary license to three applicants after reassuring the public they will not introduce casinos in the state.

Meanwhile, Lyngdoh assured the groups of his support saying that the government should revoke the Meghalaya Regulation of Gaming Act as it will have a negative effect on the youths and the society.

He further said that it is wrong to say that the casinos will bring good revenue to the state and urged the people of Ri Bhoi and the state as a whole to come out in support of the removal of the Act.

On the other hand, the Hynniewtrep Integrated Territorial Organization (HITO) on Thursday alleged that the MDA government tried to buy them to back down on their stand against the setting up of casinos in the state.

Revealing this during a rally held by the group at Byrnihat, Ri Bhoi on Thursday, group president Donbok Dkhar further said the government tried to lure the members with ‘unreliable promises’ that they will employ them in the casinos when it is set up.

He, however, said they rejected the offer saying that the group is not for sale and that they cannot be fooled.

“We will fight till our last drop of blood but will never back down,” added Dkhar.

Thursday’s rally started from Lad Umsaw and was to conclude at the proposed land where the casino is to be built. However, they were stopped by the district administration and the Ri Bhoi police on reaching Byrnihat and had to conclude the rally at Byrnihat market instead.

Dkhar during his speech slammed the government for trying to make gambling legal in the state and said the group will not back down till the government scraps the plan and comes up with a cancellation notice in the public domain.