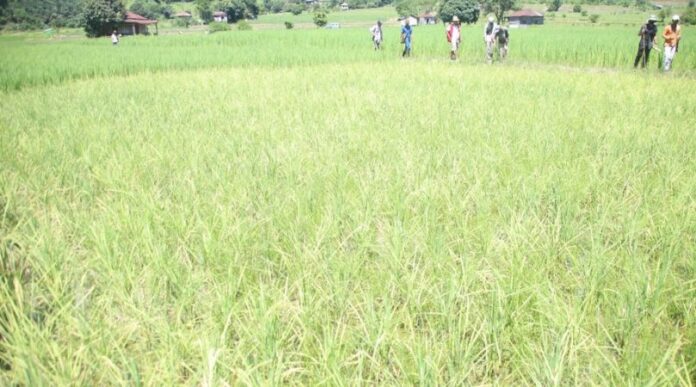 AIZAWL:
Led by Agriculture department officials, farmers in Serchhip district, on September 28, carried out widescale poisoning of rodents that started attacking paddy fields at Zawlpui area in the district.

Field management committee of the paddy fields said that this was the first time the area witnessed rodents attack.

Agriculture officials said rodent population explosion has created severe hardships for the farming community in Mizoram as 524.31 hectares of paddy fields being infested by swarms of rats, which is believed to be result of the cyclic bamboo flowering.

After ravaging paddies in the jhum (hill areas) in Serchhip district, rodents have started attacking wet rice cultivation in low-lying areas in the district.

Farmers used to type of  poision, Zinc Phosphite and Roban to kill the rats.

“Intensity of rodent attack varies from 0.5 per cent to 10 per cent in the areas where the attack occurred,” he said, however, adding “In the villages of Mualthuam N (Lunglei) and Tuirum (Mamit) a single jhum paddy each were completely destroyed by rats.”

He said that agriculture department officials have been giving mass awareness about possible population explosion of rats in August and had distributed rodenticide to the farmers since then.

With the ‘Thingtam Famine’ or the impending famine caused by gregarious flowering of a specie of bamboo locally called ‘Rawthing’ (bambusa tulda) coming in 2025, millions of rodents creating havoc across the state by ravaging paddy fields had been predicted.

The last ‘Thingtam famine’ occurred in the state in 1977 while gregarious flowering of Dendrocalamus longispathus, locally known as ‘Rawnal’ had began three years ago, which was also attributed by some people to the population explosion of rats.