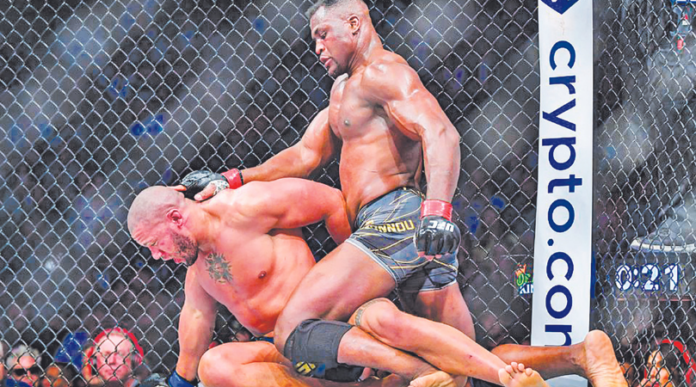 Francis Ngannou’s win in UFC 270 over interim champ Ciryl Gane has put the organisers in a spot.

The heavyweight champion, who took on Gane in a five-round clash at the Honda Centre in Anaheim, California, has made it clear that he will not fight again unless he is given a considerable fee hike.

So far, UFC President Dana White has been reluctant to consider it. The fight was a literal and figurative clash of titans with both men standing at 6 feet 4 inches and weighing in well over 230 pounds.

Both fighters also share a considerable history having been long-time sparring partners and this was evident throughout the fight with Gane winning the first two rounds on the feet, nullifying the Cameroonian’s scary knockout power, no doubt due to being used to it in the sparring sessions they have together.

But Ngannou showed that he too had learnt lessons from those sessions as he proceeded to turn around the fight in the next three rounds by repeatedly taking down the French kickboxer, leaving him helpless as he couldn’t wrestle away from the Champion’s considerable frame.

The fight between the former training partners wasn’t the only title clash on the card, however, with the co-main event being contested for the flyweight championship between incumbent champ Brandon Moreno and Deiveson Figueiredo.

This was the third battle for the title between the pair with the first two matches ending in a draw and a win for Moreno which saw him snatch away Figueiredo’s crown.

This time the roles were reversed though with Brazilian Figueiredo just edging the Mexican on the scorecards in a fight that is already the candidate for being the fight of the year despite 2022 just starting with both men displaying high levels of grappling and striking at a lightning-fast speed.

Elsewhere on the main card, welterweight Michel Pereira defeated the debuting Andre Fialho via decision to extend his winning streak to four fights in a row in a match which no doubt saw Fialho gain a lot of fans for his grit as well as a willingness to trade strikes with such a dangerous and unorthodox fighter.

While Pereira improved his winning streak, Cody Stamman extended his streak in the opposite direction after losing to Dagestani Bantamweight Said Nurmagomedov convincingly, battered in the feet with spinning attacks before being submitted in only 47 seconds of the first rounds via guillotine choke to make it three losses in a row for the American.

Finally, Brazilian welterweight Michael Morales made an amazing first impression on his UFC debut by defeating the experienced Trevin Giles via technical knockout in the first round after rocking him on the feet with a well-placed right hand and following it up with some brutal ground and pound to claim victory.

Now it remains to be seen whether Ngannou will defend his title this year or at all with him harbouring ambitions to try his hand in the world of boxing in a proposed super-fight against reigning WBC heavyweight champion Tyson Fury.

Regardless of what happens, this saga will continue to grab the attention of the mixed martial arts fanbase all over the world. (IANS)