The talented musician in conversation with The Meghalayan, spoke on a range of topics, including his recent collaboration for a south Indian movie. 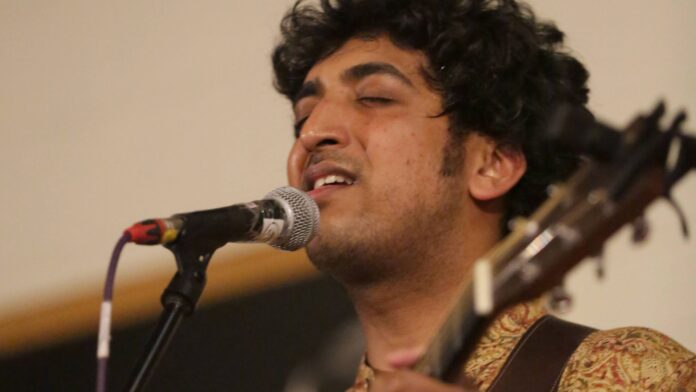 Hailing from Shillong, singer, songwriter, and composer Shubham Roy has made a name for himself in Bangalore music circuit and elsewhere with his multilingual folk-fusion and pop-inspired music. The versatile young singer has opened for some of the most prominent bands and artistes in the country such as the Indian Ocean, Usha Uthup, Raghu Dixit Project, Karthik Das Baul, Barmer Boys and Zubeen Garg, and also has to his credit some of the best original numbers.

From classical to traditional folk and upbeat pop music, Shubham’s soul-stirring music incorporates and blends together various elements, songs inspired by personal experiences, longing, connection with nature, romance and others.

Having performed at multiple gigs over the years, Shubham has explored different genres of music and gradually, his experimentation resulted in the discovery of several original tunes, including Aankhi and Wings of Fire that were featured on MTV.

The talented musician in conversation with The Meghalayan, spoke on a range of topics, including his recent collaboration for a south Indian movie.

Tell us about your music? When did you take it up?

I collaborate with different session artists who bring in their own elements and expertise to the music I make. Our music is usually a blend of folk and fusion. We try and experiment with different genres when it comes to structuring the song on the board. Eventually, when it takes off, the whole piece is an experience woven into melodies of melancholy and joy to portray moments from daily life.

I grew up with music around me. I later picked up singing from my mother and grandmother who played a lot of Kirtans and Bhajans. It was my mother who taught me my first song “Ma amader manush koro” and I remember performing it in front of a huge crowd prior to the auspicious occasion of Durga Puja.

Which artistes have influenced you?

If I have to name a few amongst some of my favorite bands and artistes Mehdi Hassan, Jagjit Singh, Gulam Ali, Agnee, Euphoria, John Mayer, Bryan Adams and Queen have hugely influenced the way I perceive music.

You have several originals to your credit? What was the inspiration behind these songs?

Aankhi was one of my first original tracks that we recorded. It is a love song that draws inspiration from the beauty that one can find in his/her lover.

Being born and brought up in Shillong, I enjoy rains very much! After composing the track for Cherrapunjee I shared it with Shiny Das, who is also from Shillong and has penned the lyrics for Aankhi. The vibe of the song instantly reminded us of the many rainy days from our childhood, and we decided that this song can be dedicated to rain, and Cherrapunjee was born.

How is Bangalore’s music scene different from Shillong?

They share a lot of similarities. Audiences in both the places celebrate authenticity and love the classics, yet they are still accepting new, explorative various genres of music.

I’ve been lucky to perform for a range of audiences at top-notch live music venues in both the cities.

You recently composed music for a south Indian movie. Your experience?

777 Charlie has been beautifully composed by Nobin Paul entirely. I got the opportunity to do playback for “The Hymn of Dharma” in Hindi and sang the teaser track in both Kannada and Hindi.

How do you manage between work and music?

The whole objective is to find a balance between the two. It can be difficult at times, but where there is will, there is a way.

What about your plans on becoming a full-time musician?

The end goal is indeed to take up music full time. However, right now I am enjoying the journey, working hard, and hoping to get there soon.

How has online platforms changed the music scene?

The music industry now is an era of digital listenership and such platforms have given artistes the liberty to release their music independently without the support of any label. Artistes can set up their own bedroom studios and get their music out to their audience.

Have you collaborated with local artistes from Shillong and North East India?

I do have a few folk projects in the pipeline for which I would love to collaborate with musicians from the North East. But I frequently jam with my friends who are from Shillong.

What are your views on Indie music?

Indie music has a lot of potential and it has been growing exponentially in the last few years. I believe it will be the next “in-thing”.