The drone was launched from Meghalaya's first ever Drone Station set up at Jengjal Subdivisional Hospital, run by the Adventist Mission Society consisting of doctors from CMC Vellore. 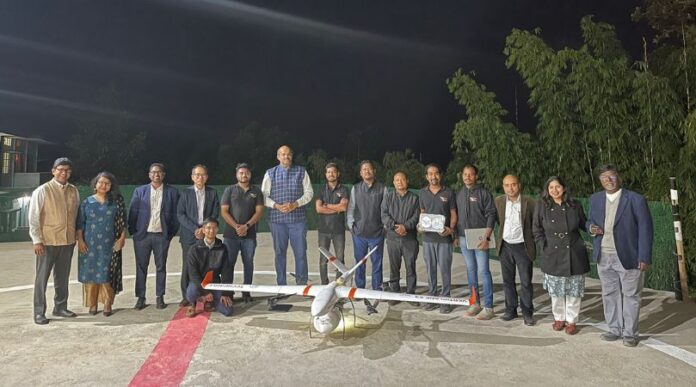 The drone was launched from Meghalaya’s first ever Drone Station set up at Jengjal Subdivisional Hospital, run by the Adventist Mission Society consisting of doctors from CMC Vellore.

Terming it a red letter day for the medical field in Garo Hills, Sangma termed the launch as a “game changer in the field of medical care for Garo Hills”.

“Normally by road it would take nothing short of 3 hours for the vaccines and medicines to be delivered to places like Pedaldoba. But the drone was able to do it in 30 minutes. Our focus is on creating more of such new initiatives in the health sector with the support of the World Bank,” said the health minister.

The maiden flight from the drone station witnessed the take-off that contained a consignment of life saving vaccines of anti-Rabies and anti-Venom for snake bites.

A second record was broken in aviation history of Garo Hills, on the same day, with the drone flying by night through the winter haze for 36 aerial kms to return to its station in Jengjal.

According to Mission director Ram Kumar S, the drone will cover an aerial distance of 50 kms and back (total 100 kms) with the most distant being Shallang health centre on the West Khasi Hills side of the border which will benefit from this technological wonder.

* All rural health centres within a radius of 50 km will be covered by aerial flights.

* 25 health centres in remote areas to get serviced by the drone station.

* Routine and emergency deliveries of medical items like vaccines, medicines, diagnostic samples, blood units to be taken by flight.

* Number of flights per day to be from 5 to 8 depending on the demand.

* Drone project to ultimately cover the entire state. 20 facilities are being finalised.

* Future plans include using the drones for non-medical and emergency purposes.