Nearly a year after Silchar-based alleged areca nut smuggler Abu Mazumdar was spotted at a dinner in Delhi apparently hosted by Mizoram chief minister Zoramthanga for his Assam counterpart, Mazumdar "reappeared" at an official function at Kolasib recently. 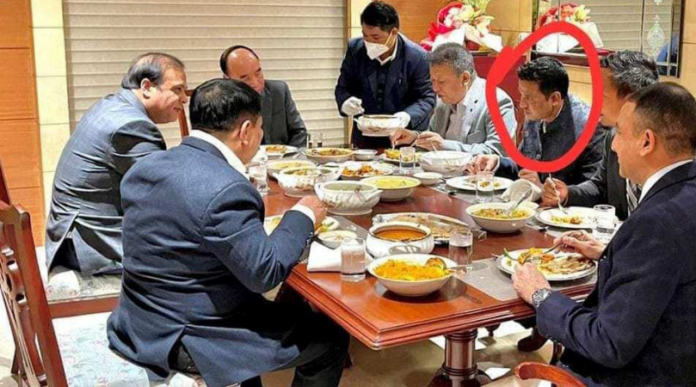 AIZAWL:
The same question that the ruling Mizo National Front in Mizoram had a hard time answering it in February this year has come back for the party to answer, or for that matter, officials of the concerned department. The question is “Who invited Abu Mazumdar?”
Nearly a year after Silchar-based alleged areca nut smuggler Abu Mazumdar was spotted at a dinner in Delhi apparently hosted by Mizoram chief minister Zoramthanga for his Assam counterpart, Mazumdar “reappeared” at an official function at Kolasib recently.

A few days after photo of Mazumdar attending the laying of foundation stone for district fast track court in Kolasib went viral, opposition party Zoram People’s Movement today asked who had invited Mazumdar to the function.

“Not only did Mazumdar attend the official function, he was also seen in a viral photo happily eating at the state food, civil supply & consumer affairs minister K Lalrinliana’s house in Kolasib,” ZPM PAC member T B C Lalvenchhunga said.

“Abu Mazumdar, alias Abub Ahmed Mazumder, is a known criminal in Assam, was wanted and arrested in smuggling case, and currently out on bail. We demand the MNF party to clarify the link between Mazumdar and Mizoram government,” he said.

“The district fast track court has denied inviting him to the function. Then, who had invited him? How did he end up dining at the minister’s residence?” Lalvenchhunga said.

That Mazumdar dining with Zoramthanga and Himanta Biswa Sarma in November last year remained unknown to the public until a Silchar-based online news portal published the photo in February, in the aftermath of the Assam police raiding Mazumdar’s residence in Silchar in connection with areca nut smuggling. The photo was captioned: From chief minister’s guest to being most wanted.

Then, the MNF was bombarded with this question “Who invited Mazumdar at the dinner?”

Opposition parties alleged that Mazumdar was invited by chief minister Zoramthanga was he was his close ally.

Both the CMO and the had MNF denounced the allegations, staing that  Mazumdar was rather invited by the Assam chief minister at the dinner along with state minister Atul Bora, the party said.