Writing Its Own MEMORIES

Golflinks remains a beguiling site for people, both residents of Shillong and tourists. The sprawling ground holds within itself, stories. Meda Marwein writes about this tourist landmark and the memory of people, living near this colonial-era heritage space, as it continues to transform, with the past and the present colliding. 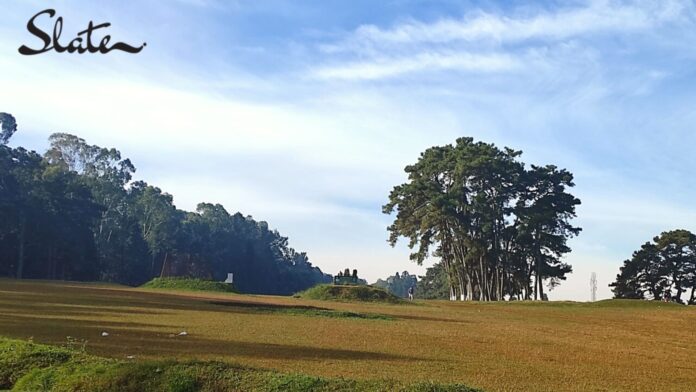 If you are ever in the bustling streets of Police Bazaar, tired and slightly annoyed by the immobile traffic, come toward Polo Hills and take a stroll beneath the pine and rhododendron forestation in one of the city’s favourite spots, a colonial heritage home to at least 100 golfers, we commonly call Golflinks.

An 18-hole course with bragging rights of being a natural course and tagged as ‘Gleneagles of the east’ by the United States Golf Association and Museum, this locale greedily holds trinkets of the past, the present and perhaps the future of the natives’ existence. This tourist landmark has served the sahep and babu of the British Raj, has had its fair share of scandals, and hosted festivals and other events, but rarely do we speak of its influence on the natives and the stories it fondly preserves over the years.

It’s a Saturday morning; B Syiem would usually be up and about by five and finish her household chores, but before she starts her day, she’d put on her Bata shoes and jacket and take a brisk walk to the green links.

Her house is in the Mawpun area, which is next to the golf course; and has never missed a day of jogging ever since her mother forced her to accompany her on one of her walks when she was a child.

“Stepping on the soft damp grass with your bare feet is good for the health, you know. That’s what my mother would say,” she fondly recalled her mother’s sayings, as she playfully nudged her 9-year-old son to tie his canvas shoelace and held his hand as she opens the main door to go for a stroll.

September mornings are rather wet and muddy in Shillong, but Syiem, along with her son, paid no heed to the weather. Upon reaching Golflinks, she takes out her purse and hands the entrance money to the guard.

“See! They’ve barricaded this place like a jailhouse, but I don’t blame them. All kinds of activities have been happening here and perhaps it’s a good thing that they’re doing this. Also, tourists and even locals come to see the course with plastic bags filled with goodies and they love decorating the links with their plastics. I have a habit of picking them up when I come for walks,” she said.

The links, on this crisp morning, is sprawled with joggers and health enthusiasts.

One glance at the (almost) out-of-breath runners and barefoot elderly people, it is easy to forget its roots until a guard somewhere blows his whistle whenever someone accidentally walks on mowed lawns, reminding us that it’s still a golf course after all.

Sauntering through a spot filled with pine trees next to the Police Training School, she (Syiem) recollects the time when she and her friend would come to this part of the course to fetch water from a spring that has now run dry. There would be a big crowd gathering here, young and old, with their pails when water was scarce, she said. Sometimes they’d get chased away when golfers came to play, but nevertheless, they’d come back once they were gone.

For others, the golf course is just a tourist landmark, but for people like Syiem and others residing near this place, it has become part of their being and identity. Children from all the dong (localities) would meet up on these lawns to play maw poin (a game where players stack a set of stones whilst dodging a ball), fly kites, and made lifelong friendships. “Barricading these lawns is a good thing but somehow it’s symbolic of the memories we made and how we’ll just tuck them away at the back of our minds,” she said as she glanced at her son, adding, “but these young ones will make their own mark in this place.”

Ma Wankhar, a retired clerk who lives in Shyiap, a locality adjoining the links, says that coming to the area was the best decision he’s ever made besides marrying his wife. Sipping red tea accompanied by pu-maloi (Khasi snack made of pounded rice), he ruefully remarked on how quickly the place has changed.

Wankhar moved to the area during the 50s after the British decided to set sail back to their homeland. He had been a resident of Jaiaw and was born and brought up there. His grandfather had a plot of land in Shyiap, so he decided to build a house here.

“My grandfather would tell me stories of this place when the British were ruling us. Before they decided to convert it into a golf course, streams and rivulets, along with several animals, especially the fox, would haunt this place. It was entirely different from what I know and have seen. There was a rich family or something of that sort, I heard who gave the British a chunk of this land.”

After World War I, the course was revamped by Captain Jackson and CK Rhodes. From a 9-hole golf course, it was converted to 18. He (Wankhar) also spoke of how the place became a stage for political agitation regarding the Inner Line Permit (ILP) in the 2000s, and recalled the numerous church conventions and festivals that were held in these lawns but now have become distant memories.

“Time is a funny thing, isn’t it? The more it moves, the more reckless it becomes. It changes its surroundings and even us; one minute you’re trying to make yourself comfortable and the next you’re out of sorts and unable to comprehend life,” he said, adding, “That’s the natural affair of things but places like these will always remain to nourish a younger generation.”

Despite the passage of time, the Shillong Golf Club stands proudly on the green lawns, with its colonial architecture and history.

It boasts of a space that was once decked with red uniforms and rather weird moustaches – a grand memory that will forever haunt these luscious links.

It also carries with it souvenirs of local political events and disputes, but most importantly, it has encased itself with anecdotes of people who love the place as their own and identified it as a nurturer and shaper of their souls.

If one ever comes in the vicinity of these great lawns, they go back with a sense of co-existing in a time capsule – the past and present collide with the smell of dew-dropped grass and the sound of cicadas.