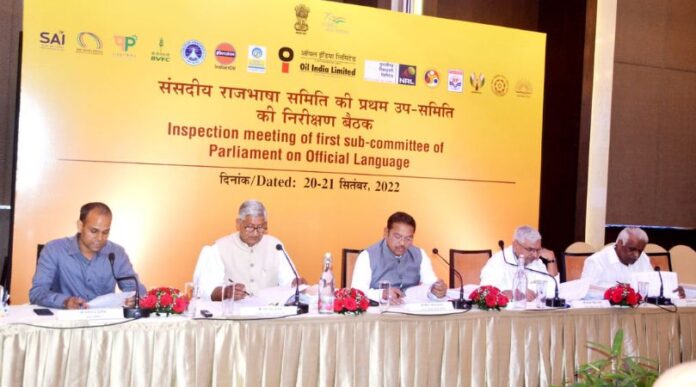 The Parliament panel committee on Official Language visited the Oil India Limited (OIL) headquarters in Upper Assam’s Duliajan and pipeline headquarters in Guwahati from September 20 to 21.

The Sub-Committee comprising of Ram Chandra Jangra, executive chairman and convener of the Sub-Committee and other members Srirang Appa Barane, Shyam Singh Yadav, Iranna Kadadi and Sujit Kumar appreciated the efforts being made by Oil India Limited regarding the progress of implementation of official language at OIL’s field headquarters at Duliajan and pipeline headquarters in Guwahati.

Dharmaraj Khatik, Sahdev Singh and Mukesh Kumar were also present in the meeting on behalf of the Parliamentary Committee on Official Language.

Before starting the inspection process, all the members, including the executive chairman of the First Sub-committee of the Committee of Parliament on Official Language, visited the official language exhibition organized by OIL on this occasion.

The efforts being made by OIL for the promotion of the Official Language Hindi were highly appreciated and expressed the desire to continue such efforts in future.