The origin of the incident could be traced to one that had happened a few hours before the bloodbath, at around 2:30 am. 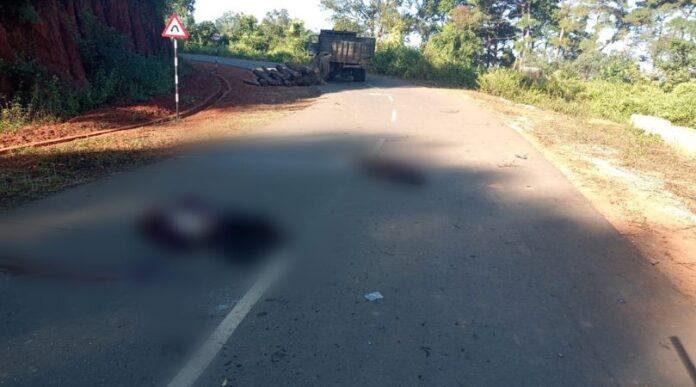 The red had started turning darker with the blood on the grass by the roadside now coagulating; across the road, a small fire was still burning on the undercarriage of a pick-up vehicle charred to its chassis and said to belong to the Assam forest department; a long row of state police and IRBN personnel lined the road, two kilometres from Mukroh, at Lumpalang in West Jaintia Hills district.

These were sure signs of something having gone terribly wrong. And it indeed had.

Earlier in the morning of November 22, at around 7, a group of Assam Police personnel had opened fire on a large number of villagers from Mukroh killing five of them besides a guard of the Assam forest department before fleeing back.

The origin of the incident could be traced to one that had happened a few hours before the bloodbath, at around 2:30 am.

According to the Mukroh village headman, Hamboi Sumer, an Assam forest department team had given chase to a truck suspected to be smuggling timber and moving towards Mukroh. At Lumpalang, with the truck not stopping, they fired at it aiming for the tyres deflating those and forcing it to stop. They then apprehended three of the occupants belonging to Mukroh village and took them into custody, thus virtually paving the way for what would follow a few hours later.

As day broke and the news of the arrest of the three spread, Sumer gave out a call to all males of the village to proceed to fetch the three arrested back.

When the large group of villagers reached Lumpalang, an Assam Police team also arrived there to tow away the truck that had carried the timber.

The villagers demanded that the arrested trio be freed and an argument ensued during which, it is alleged, some of the policemen were shoved. Surrounded and sensing the crowd was appearing to be aggressive they opened fire.

The deceased who died on the spot have been identified as Kal Shadap (45), N Dhar (65), S Talang (55) and an unidentified forest guard of Assam, while those who succumbed to the injuries are Tal Nartiang (40) and Chirup Sumer (40).

Two are in serious condition and have been shifted to Barato CHC and Ialong Civil Hospital.

However, there is another aspect to what happened on Tuesday.

According to Sumer, personnel of the Assam forest check gate at Snarew had earlier in the day seized a car bringing two sacks of rice from the paddy field.

“Snarew is within Meghalaya, but they erected the check post in 1997 and the owners of paddy fields beyond the check gate have pattas, but every time these vehicles cross the check gate they are made to pay,” he said adding this has been a sore point with the residents of Mukroh for long.

In the evening, the small playground of the village started filling up with the villagers and representatives of over a dozen NGOs and pressure groups who condemned the incident. They demanded that the culprits who had gunned down innocent people be punished and a police outpost be set up.

He said such incidents have been happening for some time because the SOPs were not being adhered to by both Assam and Meghalaya.

“These SOPs were agreed upon after thorough discussions, but are being violated. Such incidents also give the impression that our counterparts on the other side of the interstate border are getting emboldened and feel they can get away with anything,” he said.