‘Bhakts’ are jittery with Modi govt

Modi has changed. BJP supporters, who gave Modi a bigger mandate in 2019 from that which they gave him in 2014, are shaken by the Modi government's complete apathy towards the beheadings of Hindus 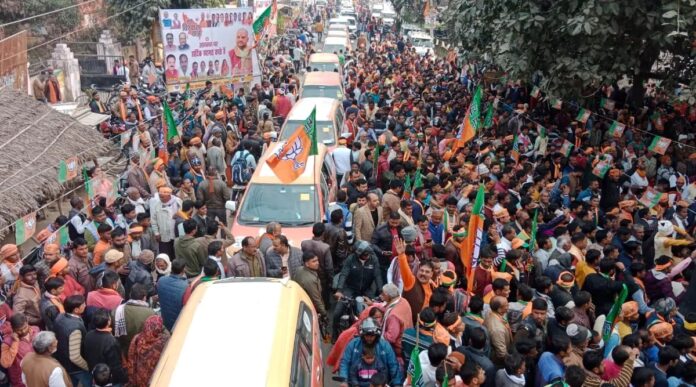 Several things were happening when the BJP was holding its national executive in Hyderabad, targeting Telangana Chief Minister K Chandrashekar Rao with an eye on the Telangana assembly elections slated for 2023. Even as Prime Minister Narendra Modi laid low KCR with attacks on dynastic politics, resistance was building up against the BJP all over for knowingly abandoning Hindus at the altar of Modi’s ‘sabka saath sabka vikas’ mantra, which without the appeasement of the Muslim vote banks of the secular parties with rations for votes, would go for a toss.

The resentment was more against Prime Minister Narendra Modi than against the BJP. The anti-Modi sentiments got a boost when the Modi government kept quiet after the Supreme Court’s diatribe against suspended BJP spokesperson Nupur Sharma. Social media erupted against the top court for alleged “intemperate remarks”. So much so, the BJP’s two-day Hyderabad national executive was overshadowed by #judges and #SupremeCourtCompromised. Even #NupurSharma took a backseat.

The utter helplessness of the Modi government was seen when Law Minister Kiran Rijiju tweeted his complete inability to do anything.

And even as the BJP national executive drew up a blueprint to conquer India, add Telangana, Andhra Pradesh and Odisha to its tally of BJP-ruled states, the rightwing ecosystem was feeling betrayed. Allegations flew thick and thin against the RSS and BJP for having destroyed the VHP and the Bajrang Dal in their attempts to embrace the same secularism that they had accused the Shiv Sena of adopting only to fall by the wayside.

The general consensus was that Modi has lost his sense of proportion, and priority. He keeps harping on dynasties when the need of the hour is standing up to the “assault on the Hindus”. Modi and Shah count West Bengal Chief Minister Mamata Banerjee also a dynast because she’s grooming nephew Abhishek Banerjee to succeed her.

This, despite the fact that the BJP has its own dynast variants. The BJP believes the electorate will vote BJP to oust KCR, and Naveen Patnaik. Also Andhra Pradesh’s Jagan Reddy. And when all the dynasts are gone, the BJP will, like Aurangzeb Alamgir, rule all of India, except Kerala.

KCR will be defeated; Jagan Reddy will lose. Patnaik will be trounced. Family rule in Maharashtra was nipped in the bud. Shah, whose son is BCCI secretary, bats for “politics of development” and believes the BJP’s poll victories are because people are fed up with dynasties.

Shah like Modi is full of newfound oats. The Maharashtra takeover electrified the BJP’s Hyderabad national executive. The Union home minister said he has “seen” the mood in Telangana like he had seen the mood in West Bengal. There, in WB, Shah failed. In Telangana, the “BJP will form the next government.”

The Modi-Shah blueprint for the BJP conquest of India is predicated on dynasties getting the boot, from Kerala to West Bengal. Shah can smell it. Modi wants the party workers to learn from the mistakes of political parties in “decline”; parties which are today “fighting for their existence”. Modi appears to have no clue that his stock is on the “decline”.

Modi does not seem to realise that he’s living in an ivory tower. That the view from Munich, and Paris, and Abu Dhabi is different from the view from Delhi. And that when he’s in Delhi, he puts on a blindfold. He didn’t see party workers killed in West Bengal, nor the death count in Kerala. And patience in BJP workers is wearing thin.

Qatar dented Modi’s stock even as it did India’s standing in the comity of nations. The BJP’s ‘Hyderabad Declaration’ didn’t enthrall anybody; the BJP’s blueprint to add the “remaining states” hardly made BJP supporters jump in anticipation; the “bhakts” are talking of, are outraged by, the beheadings in Udaipur and Amarawati. They are waiting for Modi to tweet. They know it’s a waste of time.

There’s still a long way to go for Telangana 2023. And 2024 has some distance to cover. Modi has changed. BJP supporters, who gave Modi a bigger mandate in 2019 from that which they gave him in 2014, are shaken by the Modi government’s complete apathy towards the beheadings of Hindus.

There’s a feeling among the rightwing that the “Supreme Court judges” wouldn’t have “behaved the way they did”, given a clean chit to the head-hunters, if the Modi Government hadn’t been gutless and had taken the “Gulf’ and “one for 57 and 57 for one” head-on.

There is a consolidation happening of Hindus against the BJP. There is this growing feeling that the Bharatiya Janata Party has gone so far in aping the Congress and its secularism that Modi might as well accept the skullcap he had once declined to accept. Modi & Co. might be going dynasty-busting with their ‘Hyderabad Declaration’, but Prime Minister Narendra Modi is losing the game for the plot! (IPA Service)