India to achieve its goals in Southeast Asia through bilateral means: Former Ambassador of India

The Vice Chancellor in his address mentioned, “NEHU has proposed a Southeast Asian music festival to the Ministry of External Affairs in late November whilst collaborating with six other Asian nations, to promote Act East policy as mandated by UGC.” 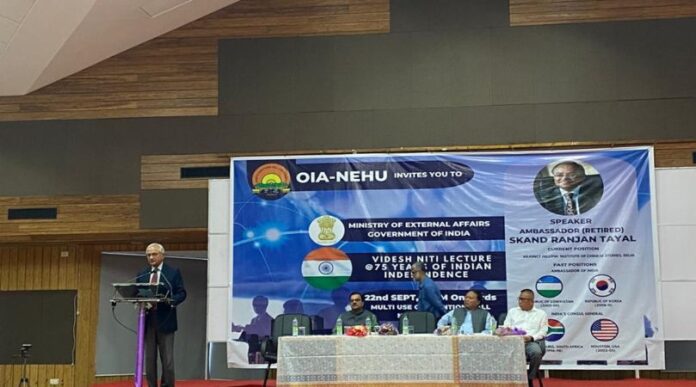 A lecture was delivered on India’s options in the changing dynamic of Act East policy by Skand Ranjan Tayal, renowned foreign policy expert and retired Ambassador in Uzbekistan and South Korea in the North Eastern Hills University (NEHU) on September 22. The lecture dissected and traced the Act East policy and its course of change over the years.

The lecture was presided by Prof PS Shukla, the Vice-Chancellor of NEHU, along with Professors of Political Science Department at Multi-Convention hall, following the public diplomacy division of the Ministry of External Affairs (MEA) choosing NEHU as one of the universities to host Distinguished lecture series on India’s Foreign Policy and its evolution through the decades.

The Vice Chancellor in his address mentioned, “NEHU has proposed a Southeast Asian music festival to the Ministry of External Affairs in late November whilst collaborating with six other Asian nations, to promote Act East policy as mandated by UGC.”

The lecture began with a background of the Look East policy introduced by PV Narasimha Rao in 1992. “India has begun to have diplomatic relations with Israel and Taiwan even though it still recognises the One China Policy and it shows India’s changing dynamics in its foreign policy,” Tayal said.

“From India’s perspective, it is more beneficial for it to look to its neighbors in the east rather than its western neighbors like Pakistan and Afghanistan which are unstable states. India must improve relations with Southeast Asia through 3 C’s (Culture, Connectivity and Commerce)”, Tayal added.

The lecture emphasized on the need for investments in the Northeast from the ASEAN (Association of SouthEast Asia Nations) which will thereby become a manufacturing hub as well as a trade route to connect India to the Southeast Asian nations by roads.

Prof Hoakip, HoD of Political Science department, in response to the lecture, talked about how the Indian government must focus more on the people of Northeast so that the Act East policy will not go in vain like it’s predecessors, and therefore New Delhi must pay attention to all the stakeholders in Northeast which will determine the success of this policy on the actual ground.

Prof. K. Debbarma, the dean of School of Social Sciences advocated measures like students’ exchange, offer of medical and health facility, upholding of human rights and tackling of human trafficking as important steps to be adopted in the actual work of Act East Policy.

The vote of thanks was presented by Prof Prasanjeet Biswa, Director of International Affairs.