Santosh Trophy: Meghalaya bow out of Group of Death

After a goalless first half in a match that they needed to win, Meghalaya conceded in the 47th minute through Amarpreet Singh. 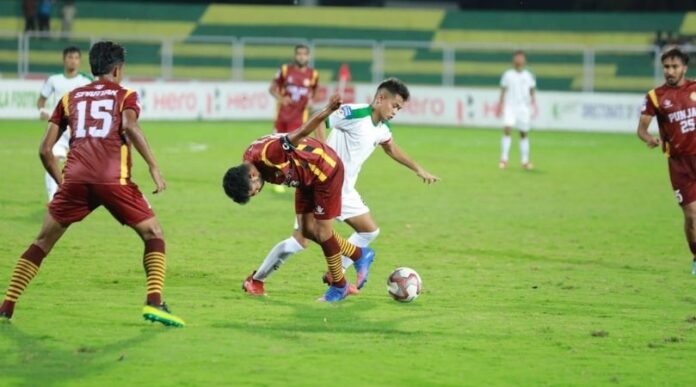 Meghalaya slipped to a 1-0 defeat at the hands of Punjab in the final match in Group A of the senior men’s National Football Championship for the Santosh Trophy final round at the Manjeri Payyanad Football Stadium in Kerala.

Four matches in seven days appeared to take its toll on the boys as they were unable to find the back of the net; they had scored eight goals in their three gruelling games prior.

After a goalless first half in a match that they needed to win, Meghalaya conceded in the 47th minute through Amarpreet Singh. Although Meghalaya may have thought Amarpreet slightly offside, the assistant referee did not raise his flag and he was able to score.

Meghalaya threw everything they could but could not find a way back into the contest. Eight minutes were added on in second-half stoppage time after the Punjab goalkeeper required extensive treatment for an injury – he had to be stretchered off and substituted – but Punjab held on for three points.

After four matches, Meghalaya finished with four points, three from the 3-2 win over Rajasthan on Monday and one from the 2-2 draw with Kerala on Wednesday. They then lost 4-3 to West Bengal on Friday. Hosts Kerala, WB and Punjab are all former Santosh Trophy champions.

Coach Bobby L Nongbet’s boys will now return home after a tremendous performance wherein they lost out on the services of many senior players between the North-East zone qualifiers and the final round as some were signed up by I-League clubs or had other duties that made them ineligible to take part.