Chief Minister Pema Khandu blew the whistle at 6:30 am to start the proceedings and by 8 am the formation using helmets was completed. 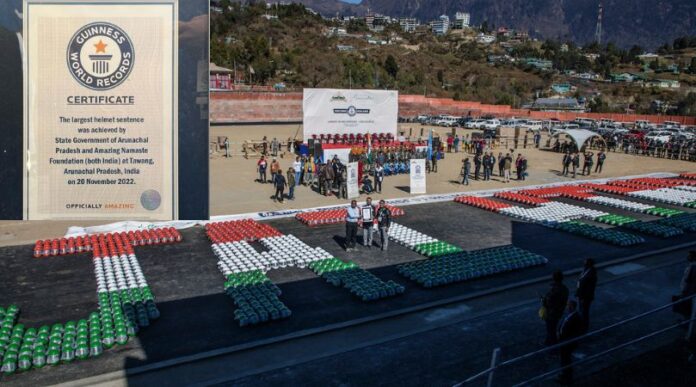 Tawang district of Arunachal Pradesh on November 20 entered the Guinness Book of World Records after it formed the largest sentence using helmets to highlight the importance of road safety, especially in the mountains.

A total of 2350 helmets were used to form the sentence ‘Jai Hind’ on Sunday morning at the Gyalwa Tsangyang Gyatso high-altitude stadium.

Chief Minister Pema Khandu blew the whistle at 6:30 am to start the proceedings and by 8 am the formation using helmets was completed. Khandu along with MLAs of Tawang and West Kameng districts attended the function.

The event titled ‘Lakshya’ – to create awareness on road safety by making the world record – was organized by Amazing Namaste Foundation in collaboration with the Government of Arunachal Pradesh.

Khandu and Atul Kulkarni, chairman of the Amazing Namaste Foundation, jointly received the Certificate of Confirmation from the Guinness Book of World Records representative, Swapnil Dangorikar. 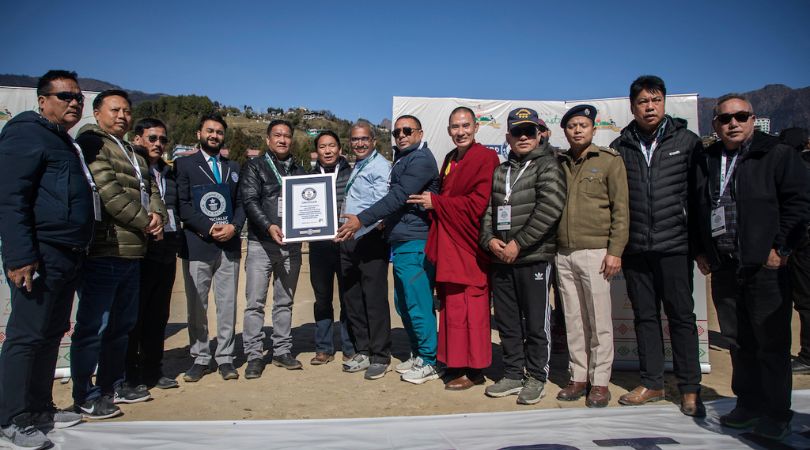 Speaking on the occasion, Khandu said that awareness of road safety measures and adherence to traffic rules have become all the more important with improved roads in the hills.

“People, especially youths riding bikes, tend to drive faster and faster on good roads. It has been found that over-speeding is the major cause of accidents on our roads here. Therefore, this event and the creation of a world record would draw the attention of the people towards road safety and mandatory use of helmets while riding two-wheelers,” he said.

A survey carried out by the government indicates that about 1.5 lakh precious lives are lost annually in road accidents in India. With the improvement in the road network and quality and better vehicles, there is a need to create awareness among the riders, drivers and general public to follow traffic discipline as well as driving protocols.

“Making it to the Guinness Book of World Records with ‘Jai Hind’ formed with the largest number of helmets is not only a message to people of Arunachal but from all over India who come visiting our mountainous state and get carried away by the natural beauty and quality of roads. Follow traffic rules and use helmets,” Khandu added.

To mark the event and create awareness of road safety, a bike rally was also organized that started from the famous Tawang Monastery and culminated at the stadium via the Maratha Ground. The bike rally comprising about 200 riders from various parts of the state and CRPF personnel was joined by Khandu. He later handed over souvenirs to the bikers appreciating their participation and contribution to creating awareness of road safety.