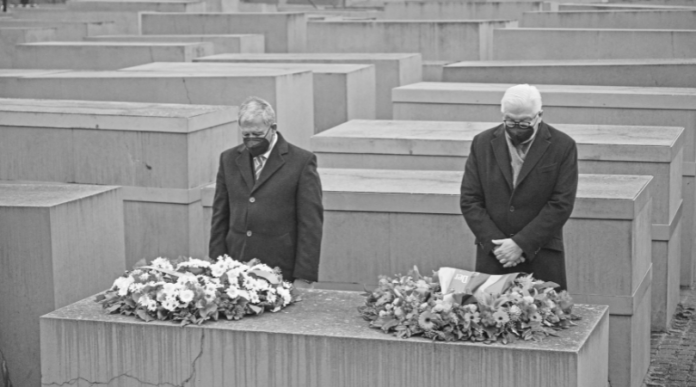 “The magnitude of the Holocaust, planned and carried out by the Nazis, must be forever seared in our collective memory. The selfless sacrifices of those who defied the Nazis, and sometimes gave their own lives to protect or rescue the Holocaust’s victims, must also be inscribed in our hearts. The depths of that horror, and the heights of their heroism, can be touchstones in our understanding of the human capacity for evil and for good.”

Holocaust Memorial Day was launched on January 27, 2000, when representatives from 46 governments around the world met in Stockholm to discuss Holocaust education, remembrance and research. They signed the Stockholm Declaration from which the above quote is taken. Why choose January 27? On this day in 1945 the Red Army marched into Auschwitz and liberated the residual inmates. I say residual inmates because in order to hide their atrocities, the Nazis killed and buried as many of the remaining survivors as they could before the Red Army reached the disgracefully named Arbeit MachtFrei main gate.

In the days before liberation, from January 17-21 1945, as Soviet troops approached, SS units began the final evacuation of prisoners from the Auschwitz camp complex, marching them on foot through the snow in a final “death march” towards the interior of the German Reich. About 56,000 prisoners of both sexes were led out of Auschwitz and its sub-camps under the escort of heavily armed SS troops. Anne Frank’s father Otto and Italian partisan Primo Levi were among thousands of others who were too ill to participate in the death march. Most of those who did perished. Soviet doctors, accompanying the Red Army, attempted to relieve the suffering of the approximately 9,000 seriously ill inmates who remained, most of whom had been too unwell to join the forced march through the snow under SS armed guard.

Tragically, by the time of the Soviet liberation, approximately 1,000,000 Jews, 70,000 Poles, 25,000 Sinti and Roma, and some 15,000 prisoners of war from the USSR and other countries had been murdered at Auschwitz (Yad Vashem figures). Why concentrate on Auschwitz? According to the Simon Wiesenthal Centre, the Nazis established 23 main concentration camps (Stammlager), of which most had a system of satellite camps. Including the satellite camps, the total number of Nazi concentration camps that existed at one point in time was at least 1,000, although these did not all exist at the same time. So why do we single out Auschwitz on Holocaust Memorial Day?

Auschwitz-Birkenau was the largest of the concentration and extermination camps. It was established on Polish soil in 1940 and served concurrently as a labour camp and as a centre for rapid extermination. It was the central location for the annihilation of the Jewish people, it was equipped with several extermination facilities and crematoria. Extermination was carried out by means of Zyklon B gas, a substance that had previously been tested on Russian prisoners of war. Auschwitz was designated as the “final solution” for the Jews of Europe. Although the majority of prisoners held at Auschwitz were killed in the gas chambers, many died from starvation, forced labour, disease, shooting squads and monstrous medical experiments carried out by the camp “doctor,” Josef Mengele.

For months, young Jewish women, like Ester Wajcblum, Ella Gartner and Regina Safirsztain, who worked as slave labourers in a munitions factory within the Auschwitz complex, had been smuggling small amounts of gunpowder to men and women in the camp’s resistance movement. The gunpowder was then passed to co-conspirators in the Sonderkommando, the special squad of prisoners forced to work in the camp’s crematoria. Using this gunpowder, the leaders of the Sonderkommando planned to destroy the gas chambers and crematoria, and launch the uprising.

The Germans crushed the revolt. Nearly 250 prisoners died during the fighting and guards shot another 200 after the mutiny was suppressed. Several days later, the SS identified four Jewish female prisoners who had been involved in supplying explosives to blow up the crematorium. All four women were executed. This example, among others, counters the myth of Jewish passivity in the face of murderous Nazi brutality. The successful rising at Sobibor must surely lay this myth to rest.

There, at this death camp, on October 14 1943, a carefully planned uprising took place resulting in the escape of 300 inmates. Leon Feldhandler, the Polish son of a Rabbi, had already formed a secret resistance committee, but the later arrival of the Red Army officer, Lieutenant Alexander Pechersky, in a transport of Soviet POWs gave new impetus to the escape plans.

A seasoned soldier, Pechersky was a Jewish communist. He and Feldhandler soon assumed the leadership of the group of would-be escapees. The group formed a plan that involved killing the camp’s SS personnel, sending the Soviet POWs to raid the arsenal and then fighting their way out of the camp’s front gate.

Why should we remember? The plain fact is that many would like us to forget, or at least have us believe that anti-semitism died with the Nazis and that the mantra “never again” refers only to industrial-scale genocide.

Following the Shoah, other subsequent 20th-century holocausts, also marked on Holocaust Memorial Day, have exposed this fallacy. Today, Ukraine has a neonazi formation in its armed forces — the Azov Battalion. This was initially formed out of the neonazi gang, Patriots of Ukraine. Andriy Biletsky, the gang’s leader, who is now Azov’s commander, once wrote that Ukraine’s mission is to “lead the White Races of the world in a final crusade … against the Semite-led Untermenschen.”

From 2014-19 Biletsky was a deputy in Ukraine’s parliament and the Azov Battalion receives arms and training from the US. And yet, right now the British government is leading bellicose calls to defend Ukraine, supported by Keir Starmer who says: “We must stand with our Ukrainian allies.” So much for “never again.”