In a meeting held in Guwahati, leaders representing various religious denomination expressed their solidarity with all those who are trying to settle the problems amicably. 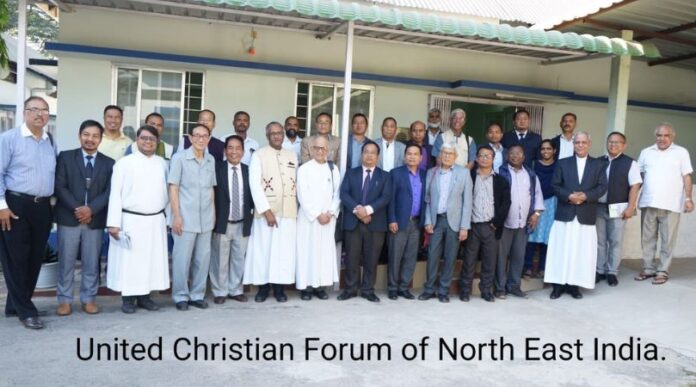 Nine major North East Christian groups urged political parties of the region to approach the vexed boundary disputes with a sense of history and fair-mindedness, on November 24.

In a meeting held in Guwahati, leaders representing the Council of Baptist Churches in North East India (CBCNEI), Church of North India (CNI), Presbyterian Church of India (PCI), North East Christian Council (NECC-All Protestant Churches), Evangelical Fellowship Of India (EFI-All Pentecostal Churches) and Regional Catholic Bishops Conference of North East India (RCBCNEI- All Catholic Churches of NEI), expressed pain at the unpleasant incidents that have happened at the inter-state borders. They expressed their solidarity with all those who are trying to settle the problems amicably.

United Christian Forum of NEI (UCFNEI) spokesperson Allen Brooks said, “We appeal to all parties of goodwill to approach the entire matter with a sense of history and fair-mindedness.”

Brooks further added, “What we want more than anything else is that an atmosphere of peace, collaboration and mutual assistance prevails among us in these days of growing political and economic anxieties. United we shall never fail.”

“The meeting saw in the alarmist report that is being spread among people in connection with the issue of ‘conversion’, nothing but an effort to malign our community which has rendered yeoman service in the field of education, health and social development to all sections in society irrespective of caste, creed, or ethnicity,” Brooks said stressing harmony and cooperation and warm-hearted relationships.

“We have been the first to denounce any sort of ‘forced’ conversion. At the same time, we also affirm the right of every citizen to choose any religion of his/her own choice that the Constitution guarantees, see Article 25-28. We consider it very wrong to make false allegations of ‘conversion’ by force, fraud or inducement to humiliate our community. We feel that such accusations are made with the deliberate intention of dividing our society.

“What we feel embarrassed about most is that it is the very identity and cultural ethos of the north-eastern region and of Assam that are being eroded by people who seek to take their models from those areas of our country, where, unfortunately, communal violence has found ideological acceptance. North-eastern society has always been open-minded and liberal, with an eagerness to promote enlightened thinking and refined relationships,” he added.