Scuffle breaks out between Congress workers, police in Mizoram 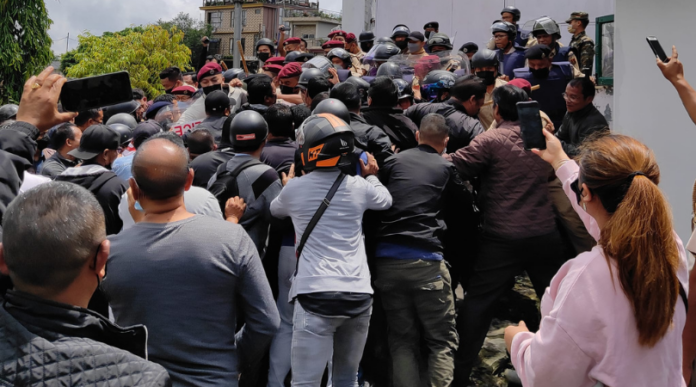 A scuffle broke out between Congress party workers and the police in front of the Chief Minister’s Office (CMO) when the former tried to meet Chief Minister Zoramthanga to submit a memorandum of demands related to Mizoram State Health Care Scheme (MSHCS) in Aizawl, on June 20.

Mizoram Pradesh Youth Congress Committee (MPYCC) president Dr Lalmalsawma Nghaka said the scuffle broke out when police did not allow them to enter the CMO.

“Some leaders of MPYCC wanted to meet the chief minister in person and hand him the memorandum. The police did not allow them and asked them to give it to the CM’s secretary instead. Congress workers insisted on meeting the CM and a scuffle broke out,” he said.

He said the police later allowed them to enter the CMO, however, the CM was not available as he was having guests at that time. “We submitted the memorandum to his secretary and made an appointment to meet him in person for another day,” he said.

He added that no one was injured in the scuffle that lasted for only a few minutes.

The Congress had taken a serious note of the chief minister’s earlier remarks that the previous Congress government did not allocate even a single rupee in the Mizoram State Health Care Scheme during its ten years’ rule, which resulted in the present fund constraint. It demanded an apology from the CM for his baseless remarks before the end of June.

Taking strong exception to the CM’s remarks, the Congress Youth president said, “It was a complete lie to mislead the people and tarnish the reputation of Congress. We are taking the matter seriously.”

According to the Congress leader, medical bills amounting to Rs 71.21 crore are now pending under the health care scheme.

Mizoram government has sought a loan amounting to Rs 1004.75 crore from Asian Development Bank to enhance the health care scheme. The Centre has approved the loan proposal to be disbursed under External Aided Projects, a government press release revealed.

In the last part of the Congress government in December 2018, over Rs 155 crore had so far been accumulated in the corpus fund, he added.