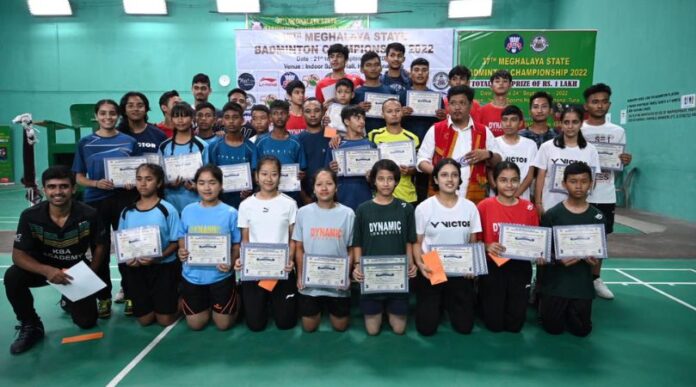 The East Khasi Hills District Badminton Association won 14 out of 16 events at the 37th Meghalaya State Badminton Championship2022, which concluded in Tura recently.

The four-day event began on September 21 and saw plethora of talents showcasing their skills in the sport. Although, West Jaintia Hills avoided a complete sweep by winning the final two events. East Khasi Hills bagged the majority of medals and other districts did fairly well.

Chief Minister Conrad K Sangma attended the final day of the championship and in his remarks said that it is a matter of great joy to see the Meghalaya State Badminton Championship being held in Tura for the 2nd time in 27 years.

He also mentioned that various sports infrastructure are coming up in Tura like the P A Sangma Integrated Sports Complex, the Track and Run field, etc that will help young people and sportspersons to level up their skills. He also said that many sports infrastructure are coming up across the State in line with the vision to groom young sporting talents in the coming years.

CM also stated that the Government is engaging the youth in programs to channelise the youths’ energy in positive direction, he mentioned about the Meghalaya Talent Identification Program that is screening sporting talents from across the State in partnership with Edge 10 Group led by former Olympian, Ian Campbell.

In the final day of the Championship, Conrad K Sangma distributed prizes and awards to the winners and thanked the organisers for a well-organised event.