As Durga Puja celebrations are about to begin, Adity Choudhury revisits the roots of the festival, adding to the cosmopolitan culture of Shillong. 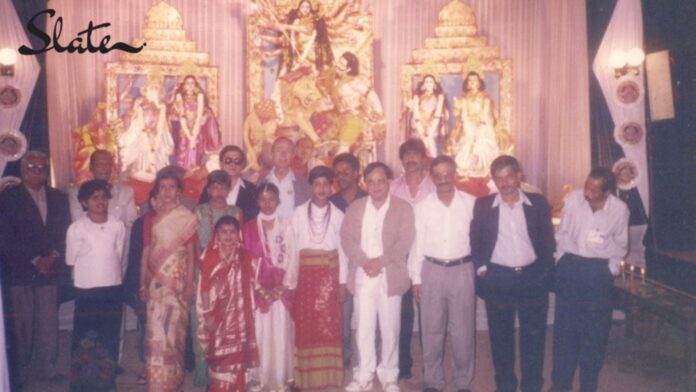 It’s that time of the year. From shopping and pandal hopping to eagerly waiting for the week-long holiday to finally commence, the festive spirit is in the air.

Several Durga Puja committees of the city have completed important landmarks in 2022. Some have completed over 100 years, while some others will celebrate 50 years.

Sanatan Dharmasabha (Harisabha) has completed 127 years, making it the oldest in Shillong, in existence since 1896. However, they will celebrate 125 years as the lockdown kept the world in standstill mode.

In 1894, people (mostly Bengali residents) living in the locality would gather for kirtans. Two years later, they decided to form an organisation. The people associated were (L) Kartick Ch. Chatterjee, Dinanath Biswas, and Upendralal Kanjilal, to name a few, with Biswas as the first Secretary of the Committee. The first Durga Puja was celebrated in “a makeshift thatched house”.

“Back then, Bengali babus worked under the British government. If you look at our culture, temples are an integral aspect of our identity – we build temples and participate in religious singing (or satsang). So it was here; the owner was Kartick Chatterjee. One fine day, they decided to celebrate Durga Puja,” Das said.

Logistics of where to get the idol from and who would make it got the residents concerned. On realising that the dearth of communication came with its own set of challenges, a unanimous decision was reached.

The first idol of the goddess Durga came from Santipur (present, West Bengal) to Guwahati by a steamer. “There were no telephones then. People got in touch with a few babus in Bengal. A small idol was made, which was then transported to Guwahati by a river. From there, the idol reached Shillong by a bullock cart over a period of two to three days.”

Before this, Durga Puja was not celebrated socially. Das highlighted how Nartiang was the epicentre of Durga Puja celebrations in the Khasi-Jaintia Hills. “The idol of the goddess was already there. Harisabha became the first locality to observe the festive spirit.”

They felt the need for a proper structure, and a temporary space was constructed at the present temple site in 1898. The residents would continue to meet for singing and discuss religion.

A shift in ownership took place in 1914 when (Rai Saheb) Prasanna Bhattacharjee purchased the land from Chatterjee and donated it to Sanatan Dharmasabha.

Das reminisced, “When the first puja was observed, a few people came together to get the resources. Be it clearing a small section of the forest, gathering bamboo and offering prayers to specific trees.”

Unfortunately, this structure was found to be in a dilapidated condition. A proposal was made to address the issue. “Some of our respected residents campaigned for funding in 1924, and an amount of Rs 2500 was raised through public donations to construct an Assam-type building. Back then, this amount was too big.”

This initiative paid off and the temple took final shape in 1930-31. However, the building was only opened during the festive season.

Apart from Durga puja, the famed Jagatdhatri Puja was also held as one of the annual social festivals, right from the 1930s, which is the legacy of the oldest committees in Shillong and continues to this day.

After independence, further changes took place. In the 1970s, residents of Harisabha realised the need for a proper temple space. Thus, came into being the Lakshmi Narayan Mandir (1983) – a 24/7 open space for rituals to be observed.

Conversing with Das takes one back to a different time; residents of this locality adhere to certain rituals. One of them involves the making of the idol of the goddess Durga. “We still make our idol like the first goddess who travelled to Shillong. No modification has been made so far. Hundred years ago, she (goddess) had the same look. We also follow the panjika (or almanac) to follow the original niyom (rules).”

The idol maker, Amar Pal, is 79 years old and has been associated with the committee for the last 20 years.

“He really loves Shillong and returns every year with his team. We accommodate him in our community hall. Though he is getting older, his work is wonderful and reflects his dedication,” Das added, with a smile.

Speaking on completing 127 years, he said, “It is not a joke to have existed here for so long. It makes us feel part of the cosmopolitan culture of our city and to have contributed to the making of the new capital when it was shifted from Sohra. I hope everyone retains the city’s cosmopolitan identity.”

Calling on members of other puja committees in Shillong to work together to help the needy, he further underlined the importance of social work.

Das added, “We have identified 10 families in the city, who are unable to earn an income and assist them financially. Why not come together to make 2022 meaningful? Many puja committees are also celebrating milestones. We should be active and focus on social work as well.”

Away from Laban, a quiet locality is geared to celebrate 50 years. Curiously, it is not widely preferred by pandal hoppers.

Oakland Bivar Road Sarbajanin Durga Puja Committee is a tightly knit community. As old as Meghalaya, it was the initiative of two youths of the locality – Parimal Dey and Bhola Dey – that gave birth to puja celebrations here. They got talking about how a Durga Puja committee is formed.

Credit goes to Sukumar Pal who helped them. With his support, a committee was formed. The first puja was held in Oakland LP School. Residents procured the materials needed for the occasion.

Interestingly, they did not have an idol, which became a part of the celebrations much later. With time, cultural programmes were also held, an integral part of Durga Puja in this community since.

Kunal Mordani, a member of the committee, said, “The first puja was a ghatt puja in 1972. Few people were involved then.”

“This is the first time people seem interested in us. We are not a very popular pandal, rather, we’re a small team of creative people who have worked hard to ensure footfall this year. In our entire 50 years, this is the first time we have spent money in a big way. The buzz has excited people of Shillong,” he added.

Among the first committee members, mention must be made of Nripendra Bhuvan Das, Padmanath Barthakur, Pramesh Chandra Dey, and Amaresh Dutta.

As the population grew in the locality, the venue shifted to the present site, a children’s park, also known as the Oakland Bivar Road Community Hall.

They have organised several competitions; carrom and cricket, to name a few, and held blood donation camps, along with art and music competitions, to commemorate a sense of completion.

Every resident of Oakland is a member of the committee. As Mordani said, “This is so big for us, we got everyone included and people are enthusiastic and contributing in their own ways.”

Listening to anecdotes, one gets a sense of history and belonging. As the several Durga Puja committees celebrate, while reminiscing about a time that was, it is people’s participation that will make this year’s Durga Puja, a memorable one.